Welcome back to the Vault my fellow Venturers! Today's post involves a trip to the archives to re-visit a set of Warhammer 40,000 campaign rules some friends and I played some years ago, and freshen them up for 8th Edition; The Maelstrom Gauntlet! Archon Varchilde is ready to pick it up and take on the challenge. 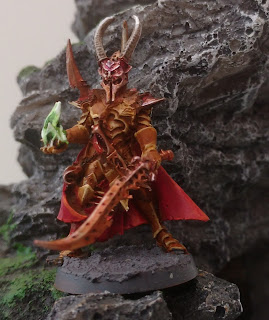 The Maelstrom Gauntlet is a mini-campaign designed to take 40K players through the spectrum of Maelstrom of War missions that the 8th edition rule book has to offer. Rather than turning up for a gaming session and dicing for a mission at random, the missions & deployment types are pre-declared, so players can tailor their list and tactics for the upcoming game.

The Maelstrom Gauntlet is ideal for 4 players as each will play every opponent twice over the course of the campaign.

To encourage some friendly competition, and generate some excitement between games, a player's result in a battle will generate a number of Campaign Points (not to be confused with Command Points). The player with the most Campaign Points at the end of the 6 games is the overall campaign winner!

Army Selection
At the start of the campaign each player must choose an Army Faction Keyword for the Campaign.

Each player then prepares a 1500 point army list for each game; whilst a player may change his army list between games, his Army Faction Keyword may not.

Note that the Emperors Tarot may affect the number of points available to a player.

Campaign Points
The outcome of a game is determined as per the mission being played. A player scores Campaign Points using the following criteria:
Note that the Emperors Tarot may affect the number of Campaign Points earned by a player in a game.

It is much more fun to play 40K with pretty models rather than bare plastic. To encourage players to use correct models and slap some paint on them, additional Campaign Points can be earned on a game by game basis as follows:
So for example Painter Paul plays against Beardy Bryan. Beardy Bryan brings an unpainted army and is using Necron Warriors as proxies for Dark Eldar Kabbalite Warriors. Painter Paul has a fully representative & painted army.  Beardy Bryan wins the game, so the CPs are determined as follows:
The Emperors Tarot
In terms of 40K lore, the Emperor's Tarot (also called the Imperial Tarot) is a pack of 78 psychoactive liquid-crystal wafers that are linked to the psyche of the Emperor of Mankind in the Warp. The Tarot, commonly believed to have been designed by the Emperor himself before the Horus Heresy, is used throughout the Imperium of Man as a form of divination.

A player may only choose each stratagem once in the campaign, so choose wisely!
The Campaign Games
The campaign games should be played in order using the following Missions and Deployment Maps
Posted by Bryan P. at 19:03