The Carcharodons Astra appear from the Void once more; this time the forces have been reinforced by more fire support, in the form of a fearsome Las Cannon wielding Devastator Squad!

These gents provide the bulk of the Anti Tank capability in my Space Shark force, and are ably equipped to do so: four of the biggest man portable AT weapons available to Space Marines:

Ably led by another Shouty Sergeant: 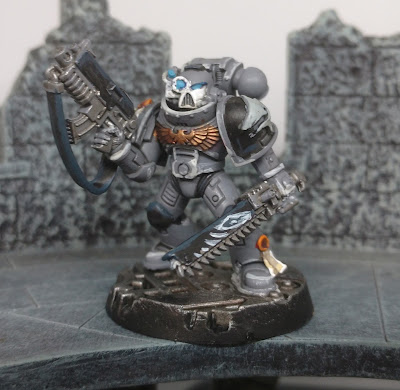 I'm pleased with how these models are turning out; the bronze aquila looks really cool and I'm getting more confident with the free hand on the chain swords.

Gaming wise I've completed 4 of my 6 pre-tournament league games, with game 5 arranged for next Friday against Necrons. I'm looking forward to this as I haven't played against Necrons in 8th edition yet.

The league has been very useful in getting to grips with playing the army. One of the aspects I've been tinkering with is the Warlord Trait on Captain Smashy (the Thunder Hammer wielding loon in charge of the Sharks). My thoughts so far:

Angel of Death: I have to confess to not having tried this one; -1 Leadership to nearby enemy units is situational and Smashy would prefer just to kill things outright.

The Imperium's Sword: This has been my go to Trait so far; re-roll charges and +1 Attack when charging has been excellent in my league games.

Iron Resolve: I like this Trait as well; +1 Wound and 6+ Feel No Pain is pretty respectable as Smashy can take a lot of fire. It's a fine line between offensive and defensive capability for the Captain.

Storm of Fire: The Aggressors benefit from having a Captain near by (re-rolling To Hit's of 1) and getting -1 AP would be an asset for them (as they have no AP otherwise). Worth considering.

Champion of Humanity: +1 to hit and wound rolls when fighting enemy Characters. Situational; the +1 attack from The Imperium's Sword is generally more useful.

Alas as a Successor Chapter, the Carcharodons Astra can't take their Founding Chapter's Warlord Trait which is a shame; the Raven Guard Trait to avoid Overwatch (Silent Stalker) is very tasty!

Hobby wise I'm continuing to slap paint on models. I've started on the first Vanguard Veteran unit, concentrating on the metallics to begin with. 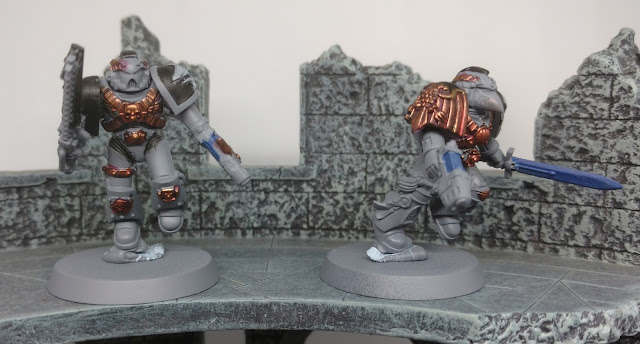 I've got a long way to go, and Mayhem feels awfully close! I really don't want to rush this army, and if I run out of time I will have to consider a fall back (i.e. already painted) army. However, that's probably a post for another day. Fingers crossed Smashy and co. will be tourney fit in time!

And on a final note I have received my copy of the new Dark Eldar codex in the mail. It's a seriously cool book; I'll post some thoughts about it soon. For now it's time for me to slip back to the Void!
Posted by Bryan P. at 20:44