Greetings Commanders! Today's post comes hot on the heels of my first game with the Space Sharks. I had the opportunity to play test one of the possible missions for the upcoming Mayhem Tournament, and play test my army at the same time.

My army list has been written to make use of the Strike from the Shadows Stratagem to get the Carcharodons into early contact with the opposition. Did it work? Kind of...

It's a cold wintry day outside the Vault today, so I've decided to huddle inside to indulge in some hobby time and drink copious cups of tea to keep warm.

I've been given some Sci Fi models produced by Traders Galaxy to review, so lets get the blisters open and see what goodies we've got inside. I should warn you there are a lots of pictures in the post!

Power Armoured Paint: The Wisdom Of The Ancients

Welcome back once again faithful Venturers. My hobby time this week has been split between finishing the assembly of the Carcharodon's Vanguard Veterans and the Primaris Aggressors, and working on a couple of new units; a Jump Pack Captain and a Contemptor Dreadnought.

The Contemptor joins a growing band of Dreadnoughts in my collection (like the burly Iron Clad chap below), and I thought it would be worth sharing a few thoughts about how useful Dreads might be to support my Carcharodons force.

Varchilde's Vault is a year old!

Varchilde's Vault is celebrating it's first anniversary and I can't believe how quickly the year has gone! I started writing the blog as a means of collating my ramblings about the different games I play and hobby projects I muck about with and I've had a lot of fun in the process.

In fact starting the Vault has led me into different hobby areas that I really didn't expect including:

I even commissioned a piece of art inspired by my favourite D&D module!

Email ThisBlogThis!Share to TwitterShare to FacebookShare to Pinterest
Labels: Musings

Hello Commanders; welcome back to the Vault.  Today's post is a quick After Action Report (AAR) of a recent run through of the Retrieve the Fallen Brother 40K Narrative Play Scenario. There's some pictures (apologies for the lack of paint; the models are pretty though), supporting words, a brief digression into some of the more unusual aspects of 40K that Narrative Play lets you explore, and then a final wrap up on my feelings on the scenario.

The story behind the scenario is that a Deathwatch mission to destroy an alien artefact has gone terribly wrong, resulting in the death of most of the Kill Team, leaving only a seriously injured Black Shield Marine who the Dark Angel Chapter suspect may in fact be one of the traitorous Fallen.

Both the Deathwatch and the Dark Angels dispatch forces to recover the fallen Deathwatch Veteran, and finally destroy the Xeno device.

The full scenario can be found here, but the deployment map is shown below just to give you a rough idea as to how the battle field is set up: 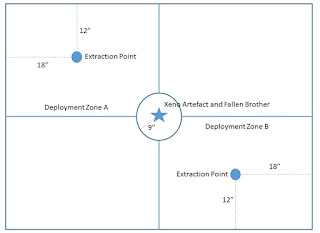