Happy New Year Venturers! Whilst a lot of blogs are writing retrospectives for the outgoing year I am firmly focused on the months ahead, and the project firmly lodged in my brain is the Carcharadon Astra!

I've found some time between the various festivities and family activities to build the first group of models for the Space Sharks. Whilst I'm still firmly in the "build" stage of the project, I thought it would be fun to share some work in progress pictures.

As a reminder, this is the sort of paint scheme I'm aiming for: 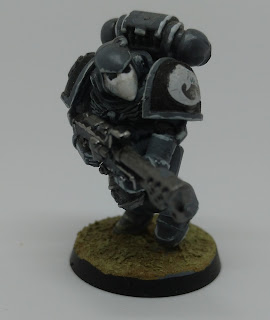 Welcome back to the Vault Commanders.  This time I've got something very cool to share, as I've taken my first leap into the world of 3D printing! No, I haven't gone completely mad and bought a 3D printer (one day that might change); I've ordered some some Shark icons and shoulder pads from the Pop Goes The Monkey store on Shapeways for my Charcarodons Astra.  They arrived recently and I've already started playing with them.

First up are the Mako Shark icons:

It's holiday time, and for Varchilde that means more hobby time, and of course that means some more posts. So as all my readers have been good little Venturers this year, you get words and pictures and not coal!

I've started work on my Carcharodons Astra Space Marine project in earnest. As I've mentioned in previous posts I want to build and paint an army that is both fluffy and effective on the table top. According to the Forge World Imperial Armour books, part of the Space Sharks strategy in the Badab Wars was to sabotage the huge power generators which provided the energy for Badab Prime's planetary defence systems, thus rendering the planet helpless.  I've decided to theme my army around one of the strike forces sent to infiltrate and destroy the generators.

Rather than the usual texture paint and dry brush approach for basing (as used on my Imperial Guard and Dark Eldar), I've had my eye on the GW Sector Mechanicus scenic bases. These have a loads of lovely detail, but I could see them being a pain to paint with models attached; so I've painted the bases first!

Welcome back to the Vault dear Venturers! This is a brief update to pimp a review article I've written for TSR Games' Multiverse site.

I acquired a lovely hard wood dice tray at MCM Comic Con, courtesy of the talented folks at Harps Corp, and felt the need to tell everyone how impressed I am with it.

Having used it during a few games of 40K, the only disappointment is that it hasn't magically improved either my luck, or tactical acumen.

If you are intrigued, feel free to check out the full review here!

Thank you for venturing into the Vault once again. This time we'll be talking Warhammer 40,000 Narrative Play. My normal games of 40K tend to revolve around Matched Play, equal pointed armies, tournament missions and so on. Narrative Play offers something a little different; as the name suggests a game tends to be based around a story or theme with appropriately selected forces.

Kanan and I have a long standing engagement for a Narrative game; and I thought it would be fun to write a scenario specifically for this. So here for your enjoyment is "Retrieve the Fallen Brother".

Another week, another post! Last time, I discussed the dilemma that many war gamers face when choosing their army; balancing something that looks cool that also does well on the table top.  I've spent a good couple of weeks discussing possible army choices for next year's Mayhem tournament, and I've settled on Space Marines.

A lot of my regular opponents will be rolling their eyes as I am something of a Power Armour Junkie, already owning an unpainted Death Watch army, a painted Grey Knights army (that I'm very proud of), and a good old fashioned Space Marine army.

My Space Marines (the Light Bringers Chapter)  were in fact my first ever 40K army, and have graced the table top many many times (including a fair few tournaments).  I don't think I've shared any pictures of them on the Vault though. Let's correct that: