Whoops! It's been a while since I've written a recap post; here's a quick run down of our intrepid adventurers antics.

Sessions 9 & 10: The party engage in discussion with the Lizard Man elder; he explains that there has been a rise of goblinoid activity and worse emanating from the Caves of Chaos some distance to the west.

These caverns were used many years ago by the servants of Elemental Evil and it seems creatures have returned to their old lairs.  Several Lizard Men hunters were ambushed by dog men, and one taken captive by them; the party agree to scout the Caves and see if they can find the missing tribesman.

The characters are escorted by T'kis, one of the hunters who escaped the ambush, who guides them to a hidden valley lined with many cavern entrances. The party approach the kobold's entrance only to be surprised by several of the cunning dog men hiding in trees! A brief battle ensues and the party deal with the sentries.

The characters advance into the lair, successfully dealing with the kobold warriors, their traps and guardian creatures.  The fearsome (!) kobold chieftain is defeated in combat, and the party find the missing lizard man and another prison (a human guardsman) within the kobold's larder!.

The soldier explains that he was part of a patrol sent from the Keep on the Borderland to find some Orcs which had been raiding merchant caravans. His patrol was attacked and he was left for dead having taken a blow to the back of the head.  The kobolds came scavenging after the ambush and took him prisoner.

He is concerned as to how the Orcs knew his patrol were coming and where they would be; could there be someone working with the creatures within the Keep?

The party heal the soldier and return him to the edge of the forest so he can make his way back to the Keep; he agrees to get in touch with them at Hearthsholme if he discovers information about evil agents at the Keep.  The characters subsequently return to the Lizard Man village where they are thanked for freeing T'kal the hunter before they return home via the strange stone portals.

Hail and welcome to the Vault my fellow Venturers!  Today's post is courtesy of a dig into the Vault's dark recesses for another painting project.  A few years ago I chanced upon a company called Infinity Engine who produce a variety of quirky miniatures and terrain pieces.  I really like their aesthetic and have purchased a few pieces with Frostgrave and D&D in mind.

My first purchase was a set of braziers, intended for use as some scatter terrain or objective markers. I've painted these up as arcane flames:

Regimental Reporting: Making the most of the Cadian kits

Welcome back to the Officers Mess!  The focus of my recent hobby time has been split between slapping paint on some more random fantasy models and readying the next Cadian Infantry Squad for the paint table.

It's very simple to buy a Cadian Infantry Squad kit, build all the 10 men and say "done", but unfortunately you don't necessarily get all the options you want for your squad in that box! In simplistic terms a fully equipped Infantry Squad will contain:


The Cadian Infantry Squad itself contains 2 sprues which will each build a Sergeant, Vox, Special Weapon (albeit flamer or grenade launcher only), and a varying number of Lasgun Troopers depending on how many of the other options you build.

Welcome back to the Vault! This week's scant hobby time has been spent playing around with the Contrast paints again. I've been keen both to play around with more colours and textures, and hit some of the back log of fantasy models. 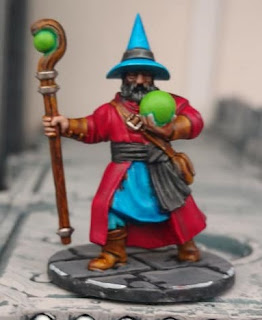