Whoops! It's been a while since I've written a recap post; here's a quick run down of our intrepid adventurers antics.

Sessions 9 & 10: The party engage in discussion with the Lizard Man elder; he explains that there has been a rise of goblinoid activity and worse emanating from the Caves of Chaos some distance to the west.

These caverns were used many years ago by the servants of Elemental Evil and it seems creatures have returned to their old lairs.  Several Lizard Men hunters were ambushed by dog men, and one taken captive by them; the party agree to scout the Caves and see if they can find the missing tribesman.

The characters are escorted by T'kis, one of the hunters who escaped the ambush, who guides them to a hidden valley lined with many cavern entrances. The party approach the kobold's entrance only to be surprised by several of the cunning dog men hiding in trees! A brief battle ensues and the party deal with the sentries.

The characters advance into the lair, successfully dealing with the kobold warriors, their traps and guardian creatures.  The fearsome (!) kobold chieftain is defeated in combat, and the party find the missing lizard man and another prison (a human guardsman) within the kobold's larder!.

The soldier explains that he was part of a patrol sent from the Keep on the Borderland to find some Orcs which had been raiding merchant caravans. His patrol was attacked and he was left for dead having taken a blow to the back of the head.  The kobolds came scavenging after the ambush and took him prisoner.

He is concerned as to how the Orcs knew his patrol were coming and where they would be; could there be someone working with the creatures within the Keep?

The party heal the soldier and return him to the edge of the forest so he can make his way back to the Keep; he agrees to get in touch with them at Hearthsholme if he discovers information about evil agents at the Keep.  The characters subsequently return to the Lizard Man village where they are thanked for freeing T'kal the hunter before they return home via the strange stone portals.

Session 11: The party's attention returns to their small holdings:


On returning from the still one evening, Juan finds a visitor waiting on his step; a small gnome called Wynne.  She explains that her village in the woods has been attacked by goblins and she has managed to escape.  She met with a mysterious friend of hers called Hoode, and he suggested she call on Juan and his adventuring colleagues for aid.  Hence she has arrived and asks if the party can run off the goblins and free any of her family and friends should they remain alive.

The party are happy to help on the promise of the gnomish farmers providing labour and aid on the homesteads, something which Wynne readily agrees to.

The party set off the next day, travelling east to the woods.  Wynne explains that the gnomish village consists of 3 large burrows (think hobbit holes) surrounded by a number of fields and allotments.  The burrows are connected under ground by a set of tunnels where the gnome community lives.

The party scout the village at dusk; all seems tranquil apart from the loud cawing of crows from the south.  Reasoning that the goblins are nocturnal the party hide overnight then return at sun up; they approach from the south and spot a number of large Crebain (Dire Crows) roosting in a tree. Two are quickly dispatched with ranged weapons whilst the others fly off to safety. 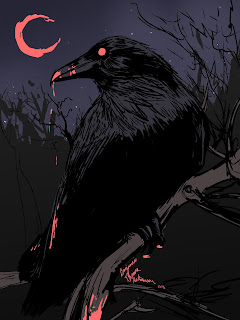 As the party approach the burrows Juan registers an uneasy feeling, the hairs rising on the back of his neck.  The characters have noticed a number of scarecrows in the allotments in the centre of the village and one differs from the others; it appears to be a gnome. As Juan moves towards the vegetable patch the the gnome-crow starts shambling towards one of the burrows.

Fearing some sort of undead creature Juan presents his holy symbol and turns it, the pitiful creature falling to the ground.  Juan goes forward to examine it and notices the gnome is actually breathing; it is not undead but appears to be suffering from some sort of enchantment.  Nanny Ogg casts a Detect Magic and discerns both Enchantment and Necromancy lingering in the air.

There is a terrible curse afflicting this humble community!
Posted by Bryan P. at 21:05