Greetings from Frosty Felstad once again. Wizards and Warbands have continued to clash in the Rune Stone Race, and more treasures have been looted from the ruined city. This week 2 games have been played, both using the Well of Dream and Sorrows scenario. 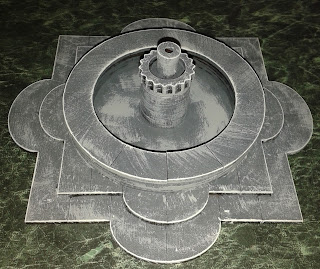 Fortune has favoured all the adventuring Wizards this game, with a healthy haul of levels, treasures and Rune Stones being gained:

(Is there a preferred ordering people would like to see (largest Rune Stone collection first for example)?)

Slurk had heard tales of a curious unfrozen fountain deep in the city wastes. An opportunity to discover moist dank ground that any up and coming mushroom hunter could not pass up.  So the plan was set around the Rusty Nail Tavern that his mushroom tatufaio (truffle hunters) called home.  Slurk was to approach the well whilst his truffle squigs sniffed for their intended prizes, whilst under the watchful eyes of his trio of sharpshooters.

From the offset, Slurks plans started to unfurl, perhaps the cauldron had not been scrubbed properly but he failed to provide any potions for the upcoming adventure.  Girding himself he set to using his secret blend of mushrooms to entice a Snow leopard to his service alongside the somewhat smelly carcass of Ole Steve the barman, former proprietor of ‘The Rusty Nail’

On arriving at the location that had been described to him, it was quickly apparent that they were not alone.  So quick to ensure that any valuable mushrooms were not destroyed by ignorant savages he sprang into action seizing the initiative.  This constant quick thinking would be a thorn in his counterparts side all game.

As the battle raged Squigs ate chickens and men squashed squigs.  All the while under a pathetic hail of ineffective fire from both warbands.  Slurks own, not managing to hit a target all 15 shots over the duration.

Having slipped in to take a sample from the well Slurk could see his companions had secured a lions share of the spoils and attempted to call the retreat to enjoy a nice evenings brewing.  However the enemy wizard and apprentice with great map movement fought a desperate fight to stop the escape, knocking down both Slurk and his apprentice Nobby to the ground.  Thankfully both awoke some hours later safe and sound in the inn.

All in all a good days mushroom hunting thought Slurk sipping on a freshly brewed potion of healing.

Here's a few snaps from the week 1 games (with an eclectic mix of terrain pieces and mats in use): 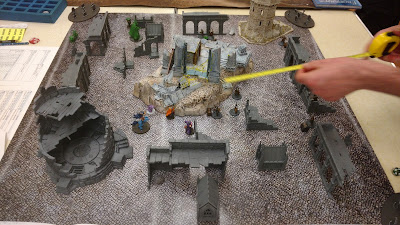 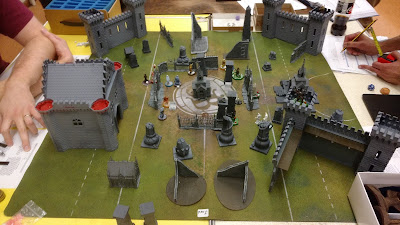 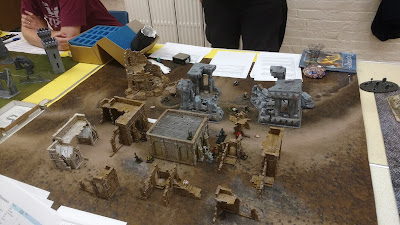 And finally; some new models for the collection, either to be used for wandering monsters or the majority of Amit's rumoured 6 War Hound Warband! 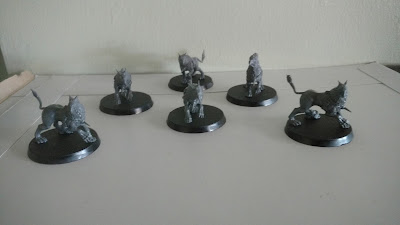 Will the intrepid Wizard's luck continue to hold in their future visits into the ruins?
Posted by Bryan P. at 20:35