The last couple of weeks have been very exciting in the 40K universe. We've seen the Dark Eldar Codex released (more on that later in the post) and the Big FAQ 1 released. You can find plenty of details, commentary and analysis elsewhere on the Internet regarding the full extent of the changes, but I thought I'd pick out a few of the pertinent details and how they apply to some of my forces.

You can find the FAQs here.

Three of the standout changes in the FAQ for me are;

Additional Command Points for Battalions and Brigades detachments. This is great stuff; Stratagems are one of my favourite additions to 8th edition and more CPs means more Stratagems to influence the game.  My Space Sharks benefit from this as they are very CP hungry particularly when using the Strike from the Shadows (StfS) Stratagem.  Which leads neatly onto the second point.

The Tactical Reserves Beta Rule. This is made up of two parts, firstly not only must half your forces' units be deployed on the battle fields but also half your armies' Power Level (PL) (so a 10 unit, 60 PL army must deploy at least 5 units composed of at least 30 PL on the table). Secondly units placed in tactical reserves (i.e. not deployed on the battle field) that deploy in the first turn can only be placed in a players own deployment zone.

This Beta Rule is intended to limit alpha strikes, but luckily the Space Sharks have an Ace up their sleeves; the incredibly powerful Strike from the Shadows. This Stratagem allows them to deploy anywhere more than 9" from the enemy just before the first turn begins, and is exempt from the location restriction noted in the Beta Rule.

In my first game using the Beta Rules, however my opponent and I both forgot that the Stratagem only exempts the Sharks from the location rule, and not the PL rule (whoops). So I need to think about the PL of my units (which is wierd as matched play doesn't use PL for anything else).

Pre-Beta Rule I would typically StfS or Deep Strike the following:
And use regular deployment on the following:
So PL 48 initially off the board vs PL 34 deployed on the table top. Now there is a quirk of Power Level that the next increase is based on a block of models rather than going up on an individual model basis. What this means is that by dropping one Claw Vet and swapping a piece or two of Wargear around I can add a Scout to each Squad and suddenly they are each PL 10!

There's obviously a bit more to play around with here, but with a little bit of tweaking the army is still good to go!

My final FAQ pick is the Rule of Three. This is a Matched Play event guideline which says that for games of between 1000 and 2000 points each player may only select any given data sheet a maximum of 3 times (with the exception of Troop and Dedicated Transport choices). This is an attempt to limit "spam" (where by players pick the same efficient or powerful choice over and over to the exclusion of others).

I think this is good for the game (I like to see a variety of units on the table), and doesn't directly impact any of my armies (I usually like to use a lot of Troops!).  With the 8th Edition philosophy of continually trying to balance the game, any overly powerful unit or ability is likely to see modification; one trick ponies aren't going to last too long (we'll see if StfS survives the Beta Rules play test!)

Coming full circle back to the beginning of the post, I mentioned the new Dark Eldar codex. I had realized a couple of weeks ago that I wasn't going to get the Carcharodons Astra finished to a standard I was happy with in time for the Mayhem tournament, but luckily for me the new Dark Eldar book has arrived through my letter box, and it looks really good!

New Stratagems, relics, faction bonuses, and best of all point drops for units! The list I used for Octoberfest has dropped in points so I've got room for more boys and toys in the army.  And first up is a freshly painted Archon (HQ choice) so I can take a lovely Battalion with all those bonus CPs! Christmas has come early to the Vault. 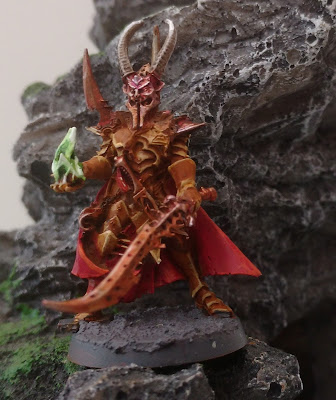 I'll muse a bit more about the Cult of the Sand Viper in future posts. Thanks for reading as always.
Posted by Bryan P. at 20:10