Happy New Year from the Vault! I hope you've all had a good break and the opportunity to indulge in some hobby and gaming time. I've played some board games with the family and also given my Grey Knights a run out using the new Codex.
There's a lot going on in this book, and it will take some games to get familiar with the new rules. My first list used a lot of MSU power armour units, including 3 Purifier Squads. I felt this was too many and so I decided to change one of the Purifier squads to a Strike Squad to provide some more Objective Secured into the list.
All my Purifier Squads are armed with double Psycannons which unfortunately isn't a legal load out for a 5 man Strike unit. And so I've needed to paint up a model or two for this new configuration. One of the Purifier Squads is actually made from old-school Metal Strike Marines, and conveniently I happened to have two unpainted sitting in the Pile of Promise/Mound of Opportunity*.
*These phrases being 2022's rebranding of the Pile of Shame! These are all future hobby projects to be enjoyed.
And these two Champions of Titan are now complete! 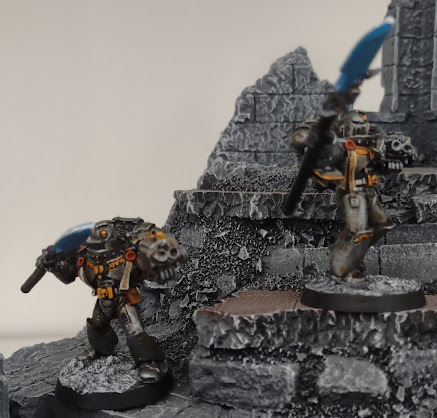 There's a certain charm to these models with their slight wonky storm bolter barrels and jabby halberd poses. And whilst plastic is a lot easier to work with, I like the "heft" of a metal model. 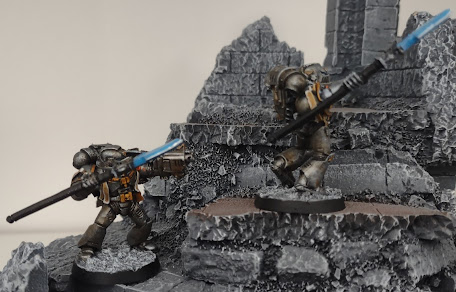 One aesthetic I prefer on these older models is the belt feed to the storm bolters; this makes more sense than the side loading magazines on the plastic models which must make the guns very unbalanced! 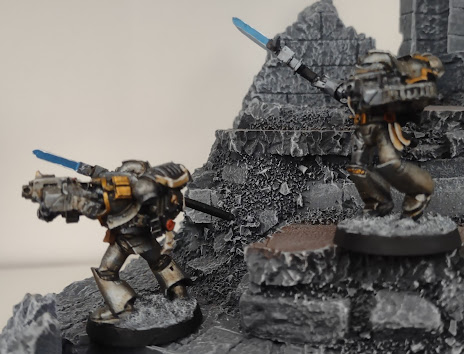 I've made use of back packs from the plastic Grey Knights kit. I *think* the original back packs were generic space marine packs, but these have long since been lost to the warp. 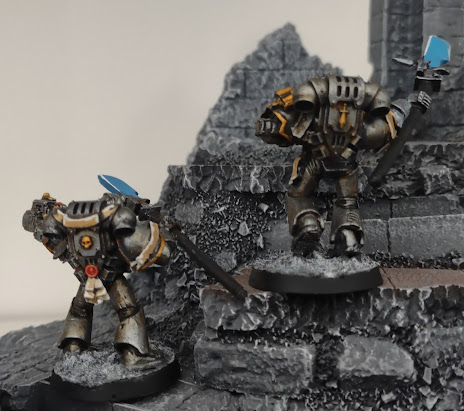 I have a game planned against Dave G's Emperor's Spears tomorrow so I'll give an updated list a run out. I'm currently painting another squad of Interceptors which will hopefully be ready by the tournament, and I shall try these out as well!
I'll report on how the Grey Knights fare in the next post.
Posted by Bryan P. at 17:40