Welcome back to the Officers Mess! I've blinked and January is almost over; by the time I've blinked again it will be First Founding's Doubles Tournament at the end of February. I've partnered with Scott for the event and we are going with something of a themed pairing. Scott is bringing his Gene Stealer Cult whilst I will be wheeling out the Imperial Guard.

I've written a draft list and it needs some bits and pieces painted for it; primarily some Scions and some new weapon options for my Leman Russ Battle Tanks. I'd like to try out some Demolisher Cannons, and I decided to paint the Punisher Gatling Cannons at the same time.

The Demolisher variant turret has this funky bayonet fitting so it's incredibly simple to secure a new option onto the model. 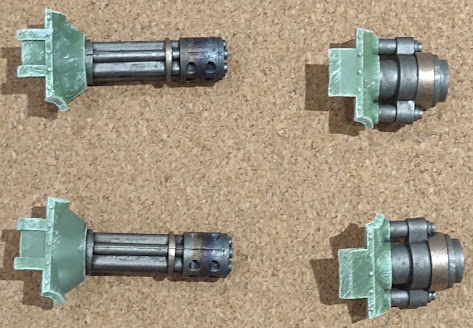 Blogger tells me that this is the 300th post on the Vault; that's an amazing milestone to mark. One of the reasons I started the blog was to record my paint schemes for my various armies, and I referred back to my Guard Vehicle painting guide (written back in 2017) as a refresher.

I've also painted 2 full sets of Russ Heavy Flamers (hull mount and sponsons). I'm not convinced I'll used them in the Doubles list but I figured it wouldn't hurt to have them available. You can ignore the scruffy ends; those are fitted into the socket fittings on the tanks and won't be visible. 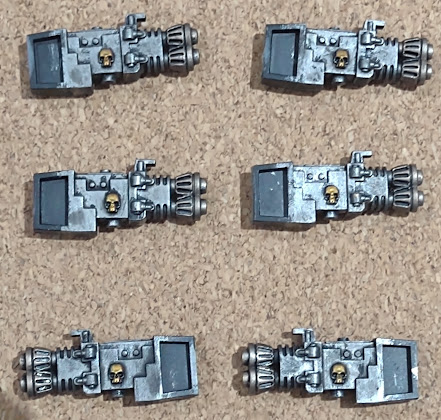 I've been enjoying revisiting some old posts over the last few days, and it's reminded me of the best aspects of the gaming and mini painting hobbies; notably the fantastic communities I'm part of. I've had a lot of fun with a lot of great people and the Vault provides a means to record those experiences.

I'd like to mark 5 year/300 post milestone is some way and I've got a couple of mini projects in mind:

Here's to many more blog posts to come, and I hope you'll be along for the journey!