Welcome back to the Vault! I'm focused on preparing for next week's inaugural "Casual Serious" RTT; this is my first non-First Founding 40K event in a *long* time (albeit a number of the First Founding members will be present) and I'm looking forward to visiting another venue and meeting some new players.

I've been painting up a new unit of 10 Interceptors: 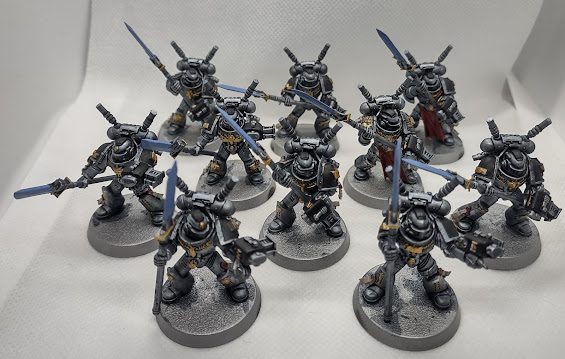 There are still some base colours to lay down (primarily on belts/strapping), and some details/highlights to paint but the models are progressing nicely. They may not be completely finished for the event (luckily there's some slack on painting requirements) but I'll get them as advanced as possible.

There's nothing flashy about these boys: they are all armed with Halberds and Storm Bolters to keep them as cost efficient as possible.

I also played a game against Dave's Emperors Spears Space Marines. Dave chose to bring a lot Primaris Infantry backed up with a number of Dreadnoughts and a Sicaran Venator. The Grey Knights took a comfortable victory over the Spears but my tradition of beat stick Characters spectacularly failing held true! (Long term readers may remember the legend of Captain Whiffy).

I'm running Kaldor Draigo; it's a lovely model, and he's got a magic sword and magic shield. What's not to love? Draigo got into assault with a unit of 4 Intercessors, and promptly failed a bunch of hit/wound rolls. 3 Blue Boys remain:

The Intercessors fell back, and a nearby Redemptor charged in. Never mind, Magic Shield remember. Wrong! All invulnerable saves also failed and Draigo is punched off the battle field!
We'll see if Draigo has better luck at the event! I'm still agonising over a few final list choices and I'll cover the list next time.
Wish me and Draigo luck!
Posted by Bryan P. at 20:22