It's time to venture into the Vault once more. I recently attended First Founding's Warhammer 40,000 tournament, where my Carcharodons Astra took to the battle field partnered with force of Deathwatch Space Marines.  How did we fare? Well let's find out! 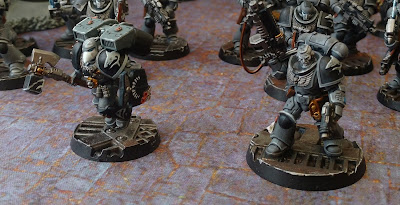 If you are interested you can find my army list here. My team mate brought along an infantry heavy list built around 3 tooled up Veteran Squads and a blob of Hellblasters led by a Watch Master and Captain Artemis.

The event itself comprised of 3 games involving unique missions (2 of which were written by myself). As per usual I'll give a brief flavour of the games, rather than full battle reports.

Game 1: Touch Down
The victory conditions for this mission are focused on 2 Relics (movable objectives) which you score points for holding but are worth more if they are in your opponent's deployment zone, and a central objective which is worth bonus points if it is held by troops and if there are Warlords near by.

We are facing Will and Josh's Double Tyranid force; one half is built around extremely fast blocks of Genestealers (led by the Swarmlord) whilst the other half is focused around solid shooting (including horrible, horrible double tapping Hive Guard).  There are a lot of other gribblies including Biovores, a massive block of Warriors, and Venomthropes to provide -1 to hit bubbles.

The Nids deploy on a wide front whilst the Marines castle up and refuse a flank; our plan is to own one relic and then push out for the central objective. 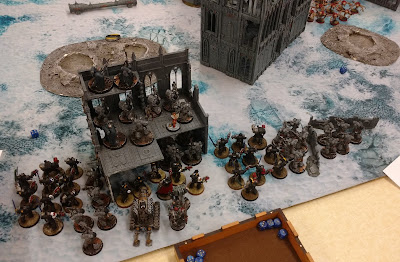 It's turn 1 and the tip of the Genestealer spear can be seen in the top right corner; Buggy tricks ensue and the 20 Genestealers are right on top of the Space Marines!

The Stealers multi charge the Veterans and two Intercessor squads.  And literally melt under a hail of Overwatch (Frag Cannons are disgusting!); only 7 bugs make it into assault! 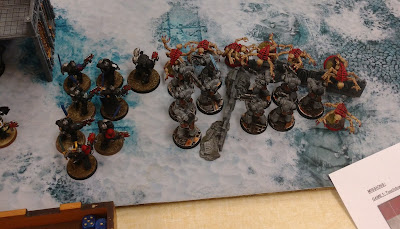 Several marines fall, but the weight of power armoured attacks deal with the Genestealers.

There are heavier casualties taken from the Tyranid shooting, but there are enough Marines remaining to blunt the next wave of Nids as the second Genestealer unit take significant casualties.

As the Nid advance continues the Swarmlord lurks out of sight behind a ruin near the central objective.  Captain Smashy senses an opportunity and charges Swarmy through the ruin. Then promptly whiffs (a theme of the day). The Swarmlord fights twice and disposes of poor Smashy.

The Nids advance the large squad of Warriors to sit on the central objective: 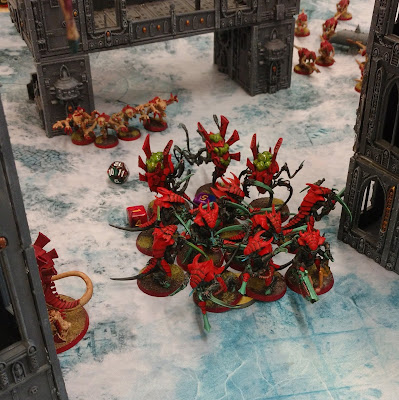 The Deathwatch Hellblasters and Artemis teleport onto the field to deal with the Warriors, however their resilience (and the covering Venomthrope aura) minimise the casualties.  Swarmy then stomps across the field to munch them! 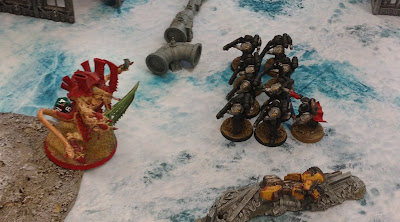 Having blunted the advance on the left side (relative to us) the Marines advance onto the relic, but the withering Tyranid fire prevent any unit from holding it.  The bugs push a unit of Termagaunts towards the other Relic, but it's too little too late and don't make it into position before the game ends. 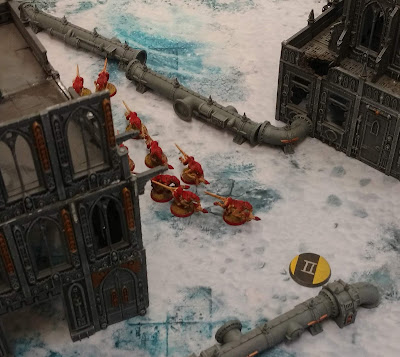 The Nids do hold the central objective, and so take the game.

Game 2: Fire Sweep
This mission revolves around 5 objectives which are progressively scored at the end of each Battle Round.  Troop choices score more VP than other Battlefield Roles, and additionally can place markers (flags) on objectives which in the absence of controlling models, count as if controlled by the team which placed the flag!  The opposing team must control the objective to tear down any flags.

Our foes are a tough match up for the Space Marines; Mike and Dave are running a pairing of Imperial Guard forces comprising  Cadian Tanks/Artillery and mechanised Catachans. Oh and Bullgryn. Bloody Bullgryn.  I'm very worried about the tanks; I ran a similar set up at Octoberfest  designed to kill Primaris Marines.

The Space Marines deploy first, trying to make the most of the available cover:

The Imperial Guard castle up in one corner with a couple of Chimera loaded with troops on the other side.

We have the first turn, and I sense an opportunity; I use Master of Ambush to set up the Lascannon Devestators to get a decent Line of Sight onto a Leman Russ, and put Smashy into position to lay into the parking lot.

The Devestators take the Russ down to half wounds, whilst Smashy promptly proceeds to whiff. Again. Smashy lands within the heart of the parking lot and hefts his Thunder Hammer into a Basilisk, and gets a single attack through.  I burn CP to fight again, and another paltry attack gets through.  The parking lot then slowly chugs forward and Smashy is reducing to smoking boots. 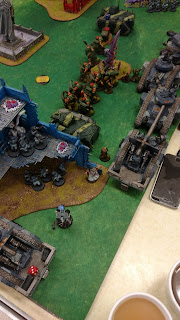 The Guard advance forward and are soon swarming over Objectives, running ahead on VP.  In a similar theme to the previous game, the Marines manage to control the left hand side of the field, there's a scrum for the centre and the Guard take the right hand side, stubbornly advancing the brick of Bullgryn up the table. 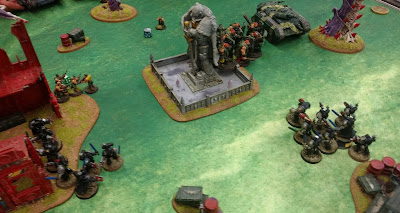 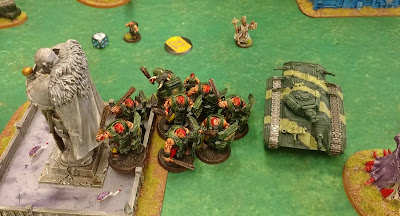 Whilst Smashy decided that he was going to have a bad day, the Aggressors pulled their weight having Deep Striked onto the left flank, murdering an Infantry Squad then promptly punching a Chimera to death. The Guard responded faster than an Astartes Speeder by Move! Move! Moving! another Infantry Squad to take the Objective back. 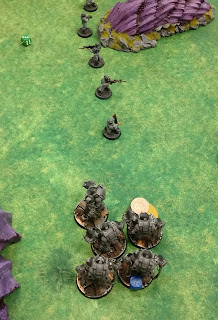 Fear not though Space Shark fans; we murdered those as well!  In fact we murdered all the Guard Infantry and a few vehicles to boot.  And we suffered signficant casualties in return!

Artemis and his Hellblasters are deep struck onto the table to hit a Russ and nail the Cadian Platoon Commander.

And the Bullgryns had a wonderful time playing whack a mole with several Marine squads! 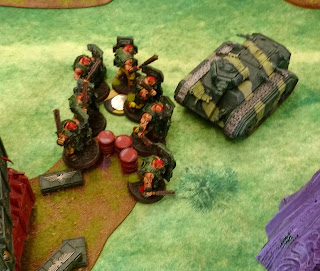 The Marines had made a claw back on VP in the later turns, but couldn't catch up with the Guard.  With time called on the game, the Cadians and Catachans claimed a well earned victory.

Game 3: Give No Quarter
The final game of the day is based around table quarters deployment; each player deploys in a corner diagonally opposite to his partner.  Victory conditions are a variation of Base Swap; there is an objective in each quarter with the objectives in the opposing quarters worth more VP than those in the home zones.

We are facing a mixed team of Emperors Spears (Ultra Marine Successors) and Harlequins.

Knowing we are going second, and with a strange case of deja vu, the Sharks castle up. Whiffy and the Aggressors use the Masters of Ambush to hide mid field. 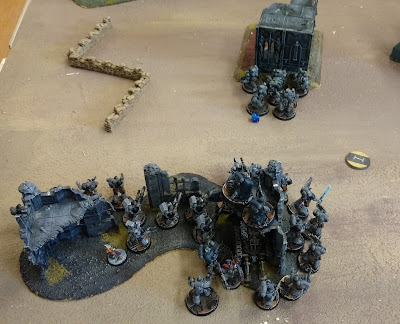 I am facing the Emperors Spears on the short table axis:

And the Space Clowns on the long table axis: 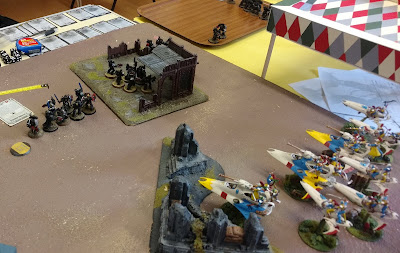 The Harlequins prepare their assault, whilst the Spears split fire onto both Marine forces.  The Aggressors activate Transhuman Physiology, and tank a massive volume of fire!

In response both Sharks and Deathwatch unleash punishing firepower, whilst Whiffy finished the day as he started, killing a single Primaris Marine on his assault!

The Harlequins assault the Deathwatch line and a grinding multi-turn melee ensued. Ultimately the Xeno hunting Marines would provide victorious.  The Sharks dealt with the Spears, taking their Objective before providing supporting fire to help mob up the remaining tanks and Eldar skimmers.  Late as always Artemis and the Hellblasters would take the Harlequin objective.

At the end of a very enjoyable day, 2 narrow losses and a significant victory would see the Carcharodons and Deathwatch achieve mid table respectability with 8th place out of 16.

As always there were a variety of painted armies on the table tops and I managed to take a few pictures over the lunch break.


And last, but by no means least:

Paul's Sisters of Battle won the Best Painted Army award.  It really is a thing of beauty, and I really should have taken some time to get better pictures of it. Anyone playing against the Custodes/Sisters combo had a real feast for the eyes!

And what about final standings, and my predictions?

The Iron Hands Successors / Salamanders combo won the event, claiming max tournament points and sweeping all before them! I can still hear the lamentations echoing in my ears.

I predicted Double Codex Marines (duh) and Double Tyranids would do well, with a wistful nod towards the Wolves/Marines and Sisters Codex.  I hung my hat on the Dark Eldar/Craftworld combo.

The top 5 were:
So my predictions were not too shabby!

I've got some thoughts about what performed well and not so well in my list (/glares at Whiffy) and I'll cover this off in the next post, and as always thanks for taking the time to stop by.
Posted by Bryan P. at 21:16