This week's post has been lost in the Warp for a time!  I played my Carcharodons Astra in a game of 40K over the weekend with a list full of heavy infantry; Aggressors, Devestator Centurions and Tactical Terminators.

Terminators have been my favourite models ever since I started playing 40K and I thought it would be an interesting idea to compare the Terminator to the closest Primaris equivalent, the mighty Aggressor. 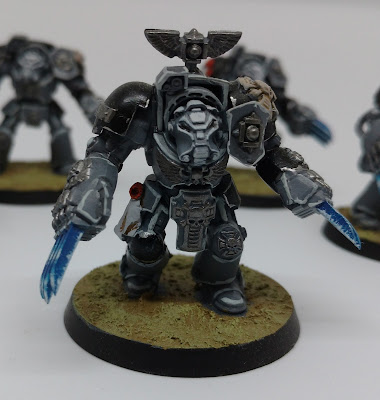 Let's compare an Aggressor armed with Auto Boltstorm Gauntlets (37 points) and a Tactical Terminator armed with a Storm Bolter and Power Fist (34 points).  It's worth pointing out that I'm making this comparison in the context of *my* army; Raven Guard Successors with the Stealthy and Master Artisans traits.

Movement wise both models are M5", however the Aggressor can advance and shoot all it's guns without penalty whilst the Terminator cannot fire at all if it advances.  Aggressor Wins.

The Aggressor Auto Boltstorm Gauntlets and the Terminator Power Fist have the same profile, and both models have the same Weapon Skill. Therefore the discriminator in the Fight Phase is the Attack characteristic, and each Aggressor has one more his Terminator counterpart.  Aggressor Wins.

It's worth noting the Terminator does have some more ranged weapon options like the Assault Cannon and Cyclone Missile Launcher, but these are expensive and not particularly reliable (-1 to hit if the model moves for firing Heavy Weapons; Master Artisan does help mitigate this downside).

Leadership wise the Terminator slightly edges out the Aggressor, being Ld 8 as opposed to Ld 7.  Terminator Wins.

The venerable Terminator isn't doing very well so far!  The biggest differentiation between the two models is in their defensive statline: 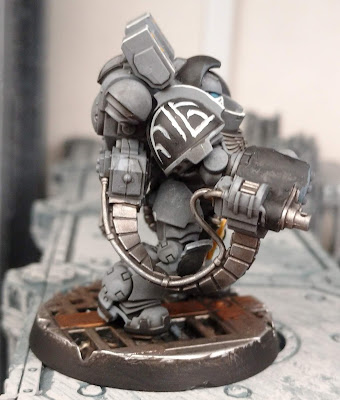 Let's compare the effectiveness of various popular weapons against the Terminator and Aggressor.  I won't repeat all the details of the calculations but I've used the following formula:

There are a few points to note in this evaluation; we are looking at successful Hits, not Attacks (i.e. I've ignored the attackers Ballistic Skill), and I'm assuming the attacker is in the favourable Doctrine whilst the defending model is benefiting from Stealthy (the net result being I can ignore both).  This is to try and keep the calculations fairly simple!

I've also included the stats for Assault Terminators with Storm Shields; these grant a 3+ Invulnerable Save so it's worth assessing if sacrificing the Terminators Storm Bolter for a big metal slab is worth it.  (Assault Termies are more expensive than both Aggressors and Tactical Terminators; this also skews relative results but lets keep it simple).

These numbers look a lot more interesting.  The Aggressor's Toughness and Wounds outweigh the Tactical Terminators improved Saves, but the Storm Shield carried by the Assault Termie provides real value!

All these units can use the Transhuman Physiology Stratagem; this means attacks can only damage on a 4+, so let's see what effect this has:

There are a few edge cases worth capturing:


So the conclusion; the Aggressors out perform Tactical Terminators in the majority of cases.  There is a case for Assault Terminators; individually they outperform Aggressors in the Fight Phase in terms of damage dealt, and can withstand more damage in return.
Posted by Bryan P. at 21:54