Welcome back to the Vault! I'm taking the opportunity to write this post whilst recovering from an epic weekend of Warhammer 40,000. Saturday afternoon was spent finishing the Interceptor squad and printing lists, etc. in advance of Sunday's event; the Casual Serious Rogue Trader Tournament (RTT) in Horsell, Surrey.

I was very lucky to be invited to attend this tournament; this was the inaugural Casual Serious event and the organisers were using the day as a "beta test" for future tournaments. There were 9 players (Lyle and Dean the organisers alternating as the "odd man"), some of whom I knew from First Founding, and others were new faces! It's always great to meet and play different opponents. 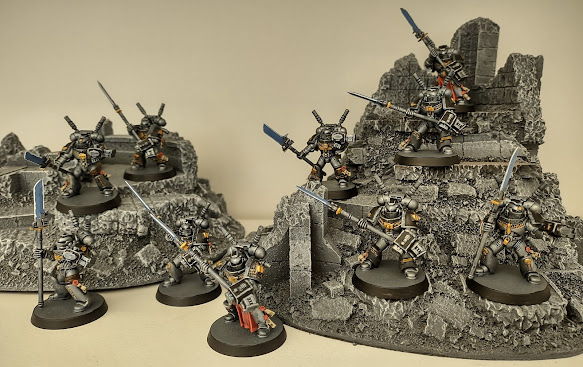 For a first time event Lyle and Dean (the event organisers) did a fantastic job:

Honestly the guys deserve to be commended for a fun day, and I hope to be able to attend more of their events in future.

I will confess I approached the day with a certain amount of trepidation; I haven't played much 40K recently (certainly not competitively), and I had a grand total of 2 games experience with the new Grey Knights. I made plenty of mistakes during the day but I'm keen to explore the Grey Knights further and improve on my play.

So not a "super optimised" meta list, but it has some teeth and tricks!

I won't give a detailed breakdown of the games; I was too busy concentrating to take detailed notes, but I did grab a few photos. I will provide thoughts on worked well and what didn't. 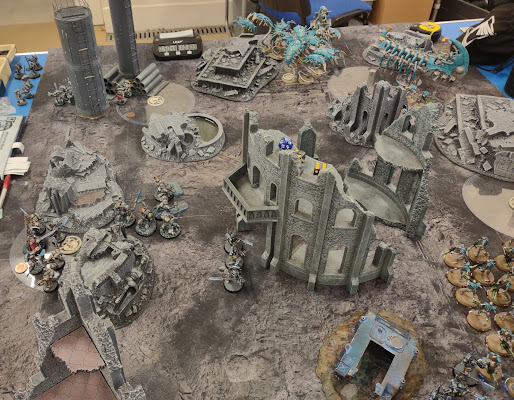 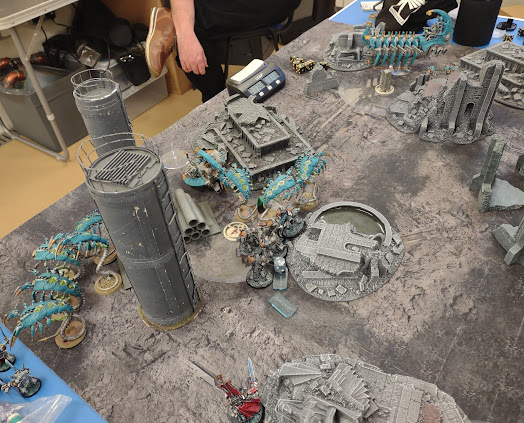 The Necrons have a great mix of shooting and melee potential and are annoyingly resilient. Sooo many models came back via Reanimation Protocols! First time I've played against the toasters in 9th edition and a valuable lesson in learning to focus fire to wipe squads to prevent the reanimation. Ultimately the Necron resilience won out and the Grey Knights lost.

Astute readers will notice a chess clock in the photos. This was the first time I'd ever played with a clock, and it was an interesting experience. It certainly forces you to be timely with your moves; Captain Slow here had to hustle. I think they were useful for keeping the pace of the game up, but ultimately I prefer a more relaxed approach to my gaming. I may indulge in a chess clock for practicing for future events.

Game 2 was against Dan's Death Guard. 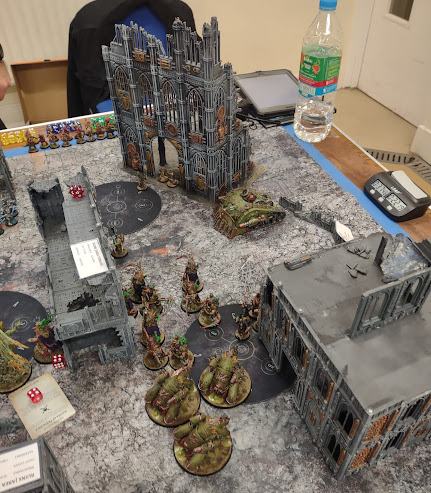 This was a great list: nasty shooting in the form of Plague Burst Crawlers and Myphitic Blight Haulers and plenty of melee with three(!) units of Death Shrouds, a Daemon Prince and Lord of Contagion. Oh and lots of Poxwalkers and Cultists.
The Death Guard are also very tough with their innate -1 Damage (which essentially halves the Grey Knights damage output as there is a lot of D2 Nemesis and Psy weapons in the GK armoury).
Again in a war of attrition the Grey Knights couldn't last the distance and so I incurred another loss!
Game 3 was against Dave's Emperors Children. 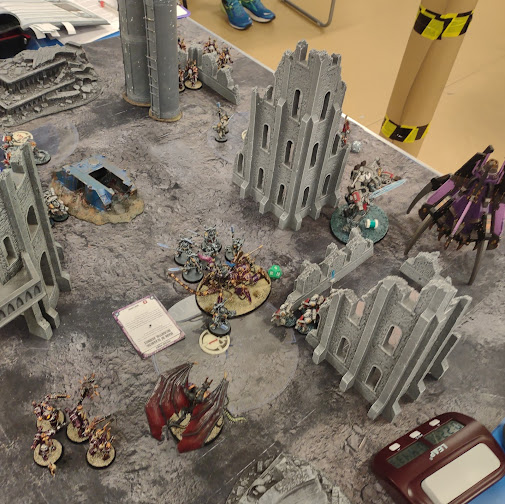 Dave brought a list of all sorts of Chaos gribblies; a Lord Discordant, Daemon Prince, Contemptor Dreadnought in a Drop Pod, Decimator and big brick of Noise Marines backed up by Chaos Marines and Cultists. Oh and a shit ton of Terminators all packing Combi Plasma.
This game saw us reverse the board as I swamped Dave's deployment zone and vice versa. The Lord Discordant is just a blender, and horrendously quick, particularly when rocking up the table under the effects of Warp Time!
In a reversal of fortune the Grey Knights managed to eek out a win against the heretics.
So three very intense and fun games. And I learnt an awful lot about how not to play Grey Knights!
Whilst certain units are offensively powerful against certain opponents (i.e. the Dread Knights) you can't just teleport a couple of units up table early game and hope to bully the opponent off an objective or two. There are too many tough units you can bounce off of, and the strategy is far too resource intensive.
So you can easily invest something like 5 CP in strategy which results in your "big hitters" hanging out to dry to be blown up the following turn. Clever players will have worked that out by theorising I'm sure, but never let it be said I'm a quick learner.
The lack of AP on the storm bolters and minimal AP on Psycannons can hurt in the Shooting Phase but there are some good stratagems to help.
Ditto for resilience; Grey Knights aren't particularly tough but there are some good stratagems but these all need CP to use effectively!
I like the flexibility that the Grey Knight Psychic Phase offers (score VP via Purifying Ritual, additional movement, mortal wounds via Smite spam), but a lot of the good powers are high Warp Charge. I'm going to have to experiment with some caster builds for additional reliability.

Some units did surprise me; I'd included the Terminators as I didn't have enough models to run a complete Power Armour list, but they were very effective. 10 Thunder Hammer Attacks with access to re-roll wounds via Hammer Hand is pretty good! You need access to a source of to hit re-rolls nearby (or the +1 to hit strat) to offset the -1 to hit penalty, but they smash big things up really well! The re-roll relic on the Justicar was a wise investment.

Draigo is a bit of star as well. Apart from a couple of casting whiffs he performed well in combat both as a beat stick and as support with his re-roll aura.

I have mixed feeling about the Purgation squad. If you can de-buff a unit with Empyric Amplification they can have decent results (particularly if you add Psychic Onslaught into the mix).

I also need to reevaluate the Brotherhood choice; I used the Swordbearers psychic power once, and there may be better choices (thinking of additional attacks and re-roll charges if nothing else).

I've got an awful lot to think as I start planning my next list (which will wait until after Chapter Approved to see if the Grey Knights get hit points wise).

Here's to the next exhausting but exhilarating day of 40K!