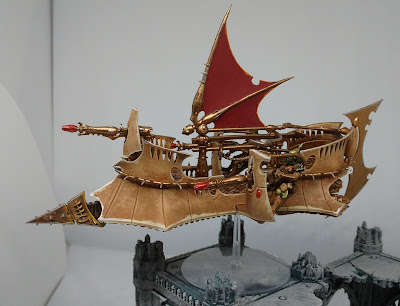 My Craftworld partner will be bringing a Psyker, so fingers crossed I'll get lovely To Wound re-rolls when Doom gets cast! I'm normally on the receiving end of Doom so I'm looking forward to seeing how more effective it makes my forces. (Note looks like I won't get to benefit from my partner's psychic buffs like this due to the specific tournament rules. Never mind!)

Here are a couple more shots of the Ravager:

Regular readers of my Dark Eldar posts will know that Ravagers are pretty much bread and butter for my lists. The next addition to the Sand Vipers is a new unit type for me; the Razorwing Jetfighter. This is quite a fun (and straightforward) kit to build; the only challenge really is getting the engine intakes correctly aligned to allow the upper and lower hull sections to sit flush. 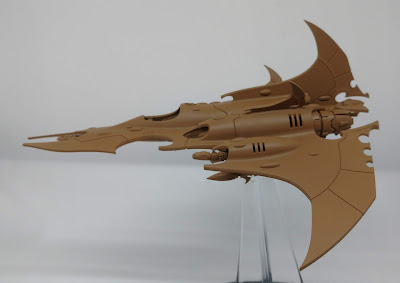 The canopy is intentionally missing; I'll paint it separately then glue it in place. 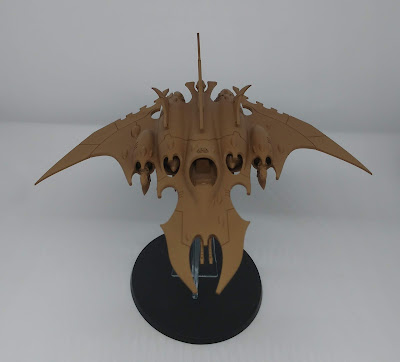 It's a very elegant looking flyer, and certainly looks like a nimble fighter when stood next to the bigger Voidraven Bomber.  I'm really looking forward to painting this model! I'll post an update (and some thoughts on how I intend to use it) once I've made some progress on it.

As traditional I'll reveal the full details of the list just before the tournament; next on the To Do list is some play testing and that may mean list tweaks.

I mentioned earlier that Santa was pretty good to me this year; I received a Kill Zone: Sector Mechanicus box for Kill Team, and a Primaris Librarian.  I've built the latter alongside a 2016 Imperial Space Marine (which I was given some time ago) for my slowly growing Space Sharks force.  I intend to revisit the Carcharodons Astra (and continue my Frostgrave Living Spells) as my hobby projects for the New Year.

Thanks for reading as always; let me know how your holiday hobby has gone in the comments!
Posted by Bryan P. at 19:20