Today I bring you a story from chill Felstad; that fabulous ruined city of Frostgrave fame. Pull your chair closer to the tavern fireside and I will begin the tale of Marley's Chains!

Marley was not a particular noteworthy Wizard of the Magical City, save for the reputation; he made coin and surely begrudged spending the same. A squeezing, wrenching, grasping, scraping, clutching, covetous, old sinner even when his mortal time and passed he ensured that no one would benefit from his wealth. From beyond the grave Marley protects his treasure with Spectral Chains!


Ahem. I apologise to Mr. Dickens for the blatant play on his cherished Seasonal words.

Earlier this year GW produced a supplement and set of models for Age of Sigmar called Malign Sorcery. The theme of the set is "Living Spells"; semi-sentient arcane constructs which run around the table top terrorising other more normal models! I don't play AoS but the models are rather splendid and I thought I could use them as set dressing for Frostgrave or D&D if nothing else.

The box (like many projects) sat on the shelf for some time until inspiration hit me; there are a dozen or so "spells" in the set and I could write some rules for each to use in Frostgrave. Rather than writing a specific scenario for each, the rules could be overlaid onto other scenarios to add a bit more variety and spice. Once there's a complete set I'll write a table which can then be used to generate a random Living Spell or two for a game.

First up are Marley's Spectral Chains: 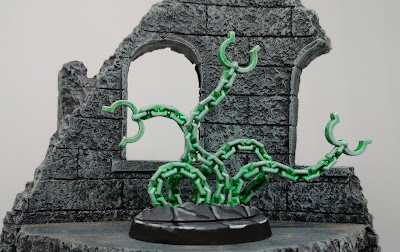 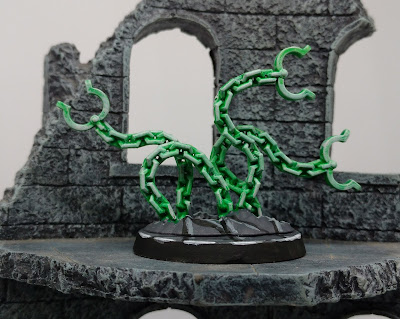 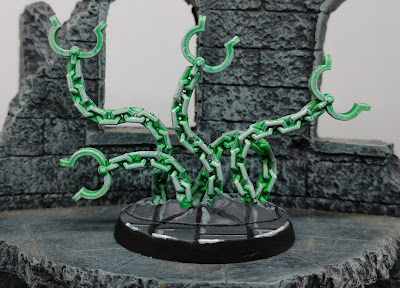 There are 3 Chain models in the Malign Sorcery set; I've painted each up using the GW Hexflame Wraith technical paint over a white primer, followed up with an Ulthuan Grey dry brush. Easy peasy! (Less easy peasy is the iconic Frostgrave flagstone base paint scheme which I'm still trying to nail).

And here are the draft rules should you care to try them out:

The Wizards and their Warbands have found a number of treasure piles once owned by Mage Marley. He still claims possession of this wealth from beyond the grave and a number of his treasure caches are haunted by his Spectral Chains.

That's it for this post; thanks as always for reading. If you are a fantasy gamer I highly recommend having a look at Malign Sorcery; there's a lot of cool stuff in the set, and I will cover more in future posts as I paint the models and dream up some more rules!
Posted by Bryan P. at 20:14