Welcome back to the Vault! First Founding's annual autumnal 40K tournament will soon be here, and has become something of a tradition it's time for me to indulge in some amateur punditry and pretend I know something about the state of 40K.

We have 28 players with 27 having turned in their army lists. Their factions have been published on the events page so lets see who's turning up. 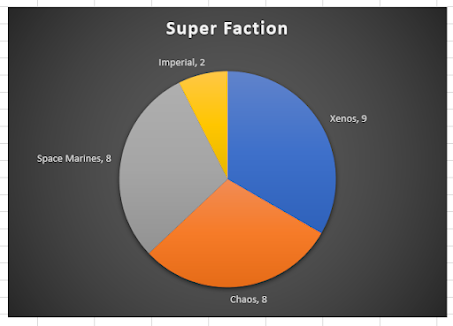 I've lumped all the Space Marine players into a single "super" faction as it highlights how few other Imperial players there are. There is a healthy split between Imperial, Chaos and Xenos players in attendance.

So what are the individual factions? 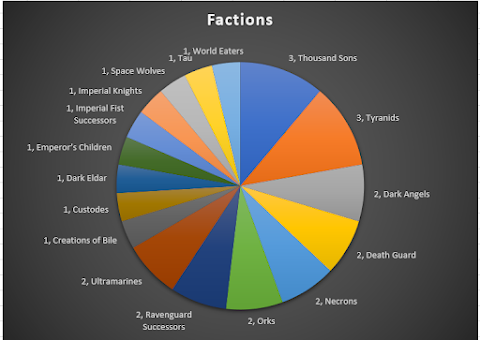 That's 17 Factions in attendance by my arbitrary categorisation, and the variety should make for a good selection of opponents for each player on the day.
Power Armour is the theme of the day with 16 players bringing some sort of Marine based list. I wonder if anyone has teched for marines in particular?
In the graph above the Space Marine players are separated via their sub-faction books. There's a good variety of the Chapters and if I guess the missing army correctly the sneaky-beaky Raven Guard are the most popular.
I've also categorised the Chaos Space Marines by individual Legion just to pretend that matters :P
Of the Legions with dedicated codexes, the popularity of Thousand Sons is quite surprising and I'm looking forward to seeing how well they do on the table.
I'm also intrigued by the popularity of Tyranids; they are a relatively old codex but have some strong builds available to them.
I'm also keen to see how well the Orks do; they have a shiny new book but I've no idea how much krumpin' practice their players have got in. I fully expect one telly-portin Morkanaut however!
It's worth considering the factions *not* represented as well; a number of the armies with older codexes are absent (e.g. Imperial Guard) but surprisingly a number of the top-meta forces are also missing. There's no Ad Mech, no Grey Knights and no Battle Sisters. This should make the field quite open on the day.

So I need to make some predictions for the day. In no particular order here are my top three:

Tyranids: I've played against one of these lists and it has literally squeezed every ounce of efficiency out of the current book.

Thousand Sons: shiny new book that a lot of players won't have faced before. Canny Cabalists will surprise their opponents.

And my Wild Card goes to: Imperial Knights. Big stompy robots backed up with Assassins. It's bonkers enough it deserves to do well.

I'm looking forward to Saturday and we'll see how well my predictions do!