Welcome back to the Vault! Last week I joined a band of my fellow 40K enthusiasts from First Founding embarked on a grand adventure to Warhammer World. For the uninformed Warhammer World is basically Euro Disney for 40kers and Sigmarites but with less Roller Coasters and more opportunities to acquire more plastic crack.
I joke! Warhammer World is a large visitors centre attached to GW HQ in Nottingham. There's a fantastic exhibition hall covering a gamut of wonderfully painted models and fantastic dioramas, a hall (with free to use) gaming tables, great food and beer on offer at Bugman's Bar, and a large store.
I spent a good hour and a half perusing the exhibition. Highlights for me were the Rohan Village, and the Horus Heresy-era Thousand Sons collection. The latter were painted in a very sharp metallic red, which I think is Flesh Tearer's contrast over a silver base so I think I'll have to give that a go at some point!
I also enjoyed the quick precis of GW's roots with the classic RPG minis. This display tickled my fancy as I've posted about the elementals (in the background) before. They are still some of my all time favourite models. 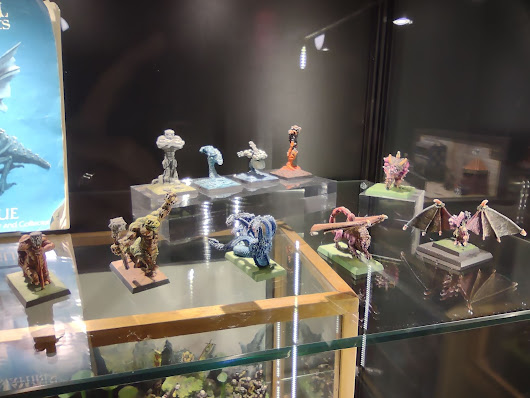 Time then for a refuel in Bugmans. Most of the guys went for Burgers, but chilli-loaded dirty fries for Varchilde; definitely a no-guilt day! (As a side note, Bugman's was table service only as the site is still running a good set of Covid-safety rules).
Suitably refreshed we hit the store and lightened our wallets, before returning to the cars to drop off purchases and pick up our models for a game.
There are a number of hobbyist's models on display within the store and I spotted this little gem of a conversion in one of the shelves: 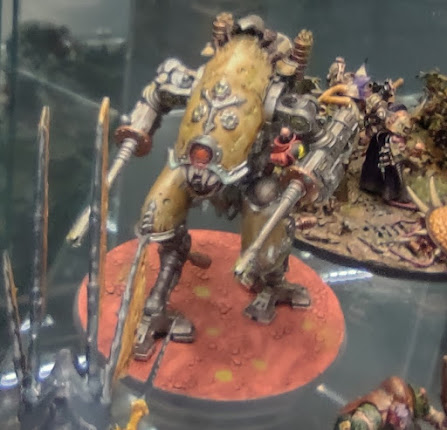 That's a Nurgley-fied Armiger with it's armour donated from a Bloat Drone and a Blight Hauler. That's another reason I love visiting WHW; so many models on display to trigger hobby inspiration.
However, the game was the highlight of the day for me. Moving models and rolling dice is something that's been sorely lacking over the last 18 months. Multi-player games aren't really about high strategy and complex tactics; it's a social gathering with banter on the end.
Dave wrote a scenario in which Team Chaos had to destroy the defenses around a set of Doomsday Devices before setting them off whilst Team Imperium had to basically stop us, scoring points for each intact Device and additional points for killing off Chaos Characters.
Team Imperium comprised:
matched against were Team Chaos:
Here's a few pictures from the game: 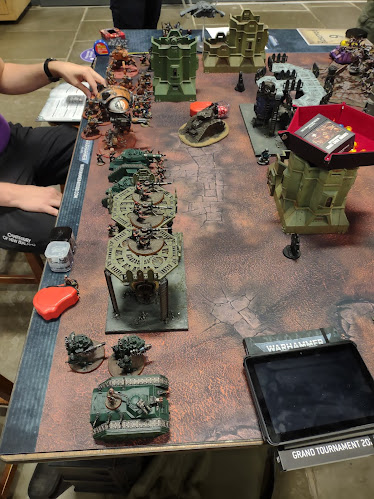 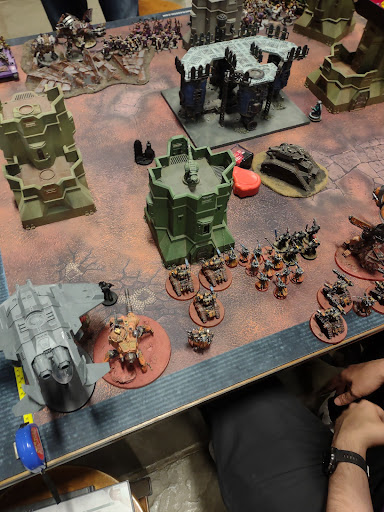 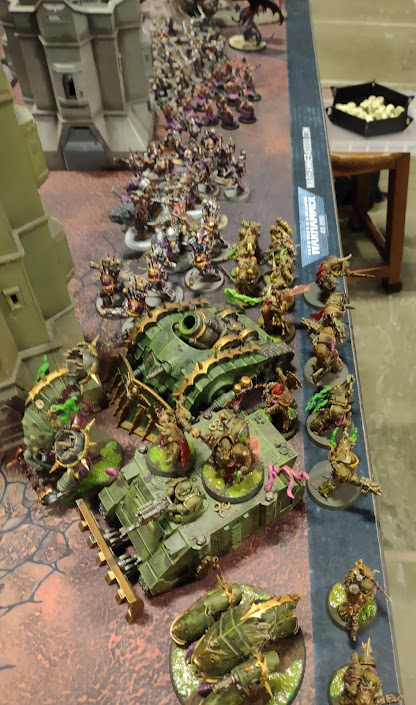 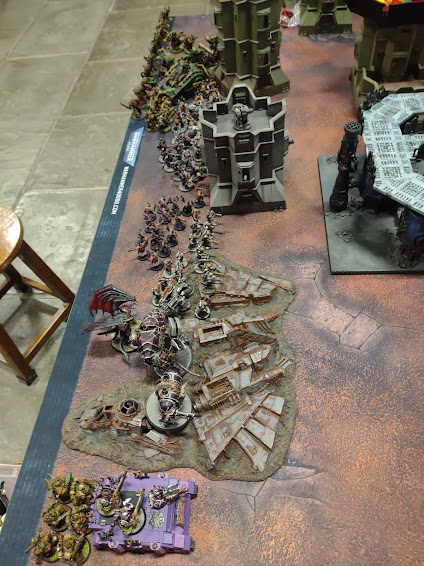 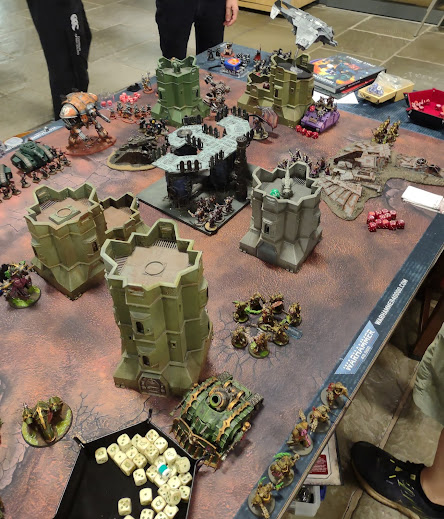 Team Chaos managed to squeak out a win against the followers of the False Emperor, but at a great cost; nearly all of Bile's forces were destroyed bar Fabulous himself who attempted to run off in the Rhino!
High points:
I did mention a dash around the shop. I was a little disappointed by the sparsity of models in the Forge World store but that probably saved my wallet! I did pick up a Helbrute and some Legion dice for the Death Guard. I really like these; they have a good weight and only a single symbol (on the 6s) so they are easy to read. 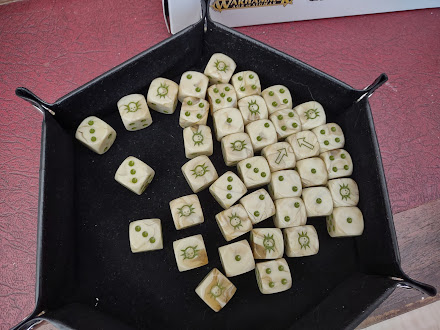 I also picked up the new Grey Knights codex and dice. I shall be digesting the contents of the Codex whilst I'm away on holiday. 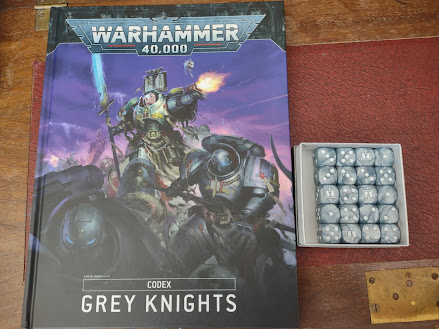 I'm impressed with the GK dice as well; good size and most importantly EASY TO READ. I really hope GW are done with making the god awful illegible dice of yore. I've found a nicely sized jewellery box to store the GK dice, and am looking for something suitable to hold the (larger number of) Death Guard dice.
So a great day out with great company; I look forward to many more such occasions in the future.
Posted by Bryan P. at 19:12