Welcome back to the Vectorium! Today's post is both early and short! I'm off to Warhammer World tomorrow with some of the First Founding 40Kers, and we are making a full day of it. I'm taking along the Death Guard as we've got a table booked for a multiplayer game, and we'll still have plenty of time to visit the Exhibition Hall, go impulse shopping in the store, and eat lunch in Bugmans!

I have a couple of units on the hobby desk at the moment; a unit of Blight Lord Terminators are almost complete and I've started a second Rhino Transport. In true Death Guard fashion I've been modifying the stock Rhino kit to show Papa Nurgle's blessings. 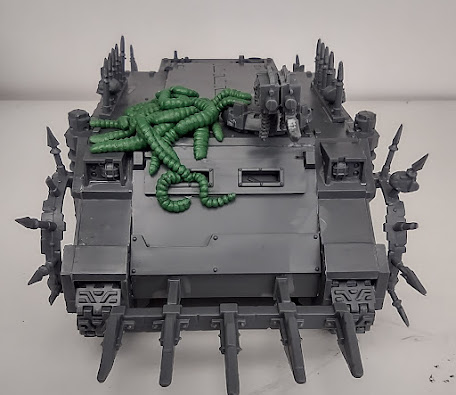 I've had this notion to make a tentacle infested vehicle for a while; in this case there's a writhing mass which have erupted from the top hatch, and front window! 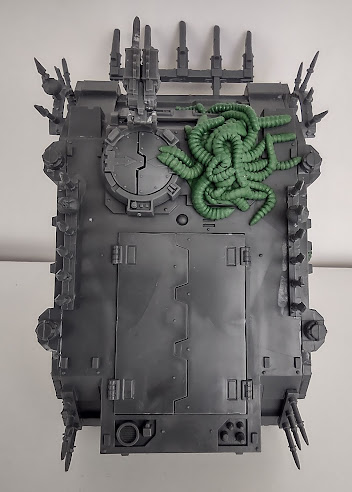 I'm very pleased with the green stuff work; I'm usually fairly terrible working with the material but this time the results look how I'd intended. The process is quite simple as I'm using the Green Stuff World "tentacle roller" to create the individual lengths and them arranging them to my satisfaction.
I've added further smaller masses on the sides of the transport. 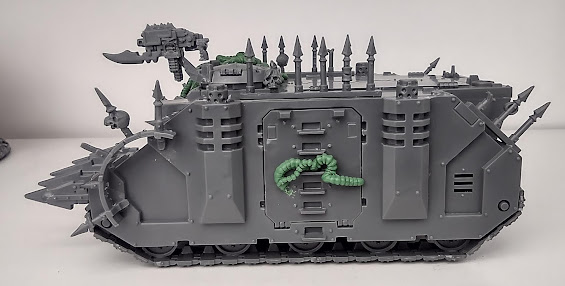 That's probably enough tentacles on the Rhino. I might add some plasticard hive vents as I did on transport #1 but that's a job for another day.
That's it for this time; I'm really looking forward to the Warhammer World trip, and I'll report on the highlights in the next post.
Posted by Bryan P. at 16:07