Welcome back to the Vectorium! This weekend I've played my third(!) game with the Death Guard, this time against James's Death Watch Space Marines. I'm starting to get to grips with the Death Guard rules, and I'm now thinking about how Secondary Objectives affect my army.

Secondary Objectives are a great addition to the 9th edition missions; each game you pick 3 secondaries from a list and you can score up to 15 Victory Points in each. However! (Of course there's a However) Not every Secondary is suitable for every army, and every opponent. I thought it would be useful to go through the list of Secondaries, and how useful they are for my 1K list. 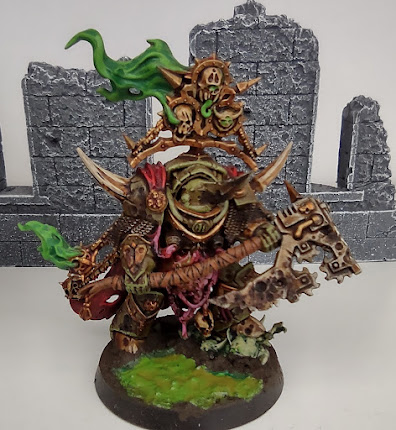 Some Secondaries require a unit to take an Action: basically they forego some other activity (shooting, etc.) to achieve some sort of condition which will hopefully result in Victory Points! I don't have a lot of units in this army so taking Actions is something I'm fairly reluctant to do. In future I may need to make some modifications to the list to allow me to take actions.

There are various categories of Secondary Objectives and a player can choose one from each, so let's go through each in turn.

Engage On All Fronts: Progressive Scoring for units in 3 or more table quarters. I'd initially discounted this but given Primary Objectives typically want units in multiple locations this is potentially a good choice.

Behind Enemy Lines: Progressive Scoring for units in the enemy Deployment Zone. This is tricky for the Death Guard early on as the units are quite slow moving. If I'm in the enemy DZ I'm probably winning any way. Good for bigger point games when I've got Bloat Drones and Termies to deep strike in.

Stranglehold: Progressive Scoring for controlling 3 objectives and controlling more than your opponent. Hard to achieve at 1K points with limited units. Don't think I'd take this one.

My eyes glazed over when I first read this Secondary, but in simplified form its quite interesting, but hard to achieve with the current list (which has 4 Bubonic Astartes Units). I'd need to keep each such unit alive and be very precise with positioning to score well. Better in bigger games with more units (and the Virion characters, etc.)

No Mercy No Respite

No Prisoners: End Game Scoring for killing non Vehicles, Monster or Beasts. Currently this is a go to; I need to kill enemy models to clear objectives and so I might as well claim some additional VP along the way. The new Death Guard are very efficient at killing infantry and there's a tendency see a lot of Infantry in the low point games. It's good against horde and Marines, since the VP count is Wound based, not model based.

Grind Them Down; Progressive Scoring based on killing more units than your opponent killed. Good against MSU lists or similar.

To The Last: End Game Scoring for having the 3 most expensive units in the list surviving to the end of the game. I haven't played with this option yet but if could be good; my choices are the Plague Burst Crawler, Choppy Marine squad and then one of the Shooty Marine squads. Given the resilience of Death Guard this could be strong; plus I don't need to take Actions, worry about positioning, etc.

Fleeing Vectors: (DG Specific) Progressive Scoring based on an enemy unit failing a morale test whilst another model in the unit died to a Plague Weapon. Yuck, just yuck. I'd rather just kill a unit dead dead dead, especially when my opponent works out they can spend CP to auto pass morale and deny me VP.

Raise the Banners High: Progressive Scoring and End Game Scoring. Take an Action to raise a banner on an Objective; score VP based on the number of Banners on the table. This isn't a bad option; sometimes Plague Marines want to sit on Objectives for the Primary and if there's bugger all to shoot then planting a flag is a good alternative. I have taken this and would consider it again. Characters can take this Action which is a good option for the Plague Caster.

Investigate Signal: Progressive Scoring for an Infantry unit taking an Action in the centre of the board whilst there are no enemies present. I haven't tried this one yet; in the missions I've played the Objectives have been away from the centre and I don't have the spare unit capacity to indulge this. I ought to try it out and see how it affects game play however.

Retrieve Octarius Data: End Game Scoring. Infantry Units take Actions to tally table quarters, and you score VP based on the number total number of tallies. Another good option given you tend to want to be in quarters, and will potentially score better than Banners.

Spread The Sickness: (DG Specific): End Game Scoring. Take an Action to (potentially) "contaminate" Objective Markers; score VPs for each contaminated marker. Internet Wisdom says this is good; however not for my current list. First of all the unit has to take an action, then roll to determine if it is contaminated, and then take a bunch of Mortal Wounds. May be OK for Poxwalker lists but rubbish for a more elite army; if I'm taking Actions I want guaranteed results.

Bring It Down: End Game Scoring. Kill Monsters or Vehicles to score VP. Again enemy list dependant and potentially a trap; if your opponent only has one or two vehicles this option won't offer up many points. 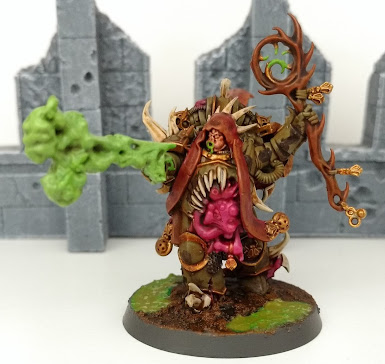 Warp Ritual: End Game Scoring. Take Psychic Actions in the centre of the board, and score VP based on the number of Actions completed. I'm reluctant to take Psychic Actions with the Plaguecaster, especially if there is an opposing Psyker who can shut the Action down with Denies. That saying, if the Psyker doesn't have targets for powers, or there isn't an enemy who can Deny these Action based Psychic Secondaries may have some potential.

Pierce the Veil: End Game Scoring. Take Psychic Actions near the opponents board edge and away from other enemy units. This is a go big or go home option, however given the limited ability to get the Plaguecaster into position I'd likely pass on this option.

Psychic Interrogation: Progressive Scoring. Score VP for taking a Psychic Action within 24" of a visible enemy Character. I quite like this option; people do need to bring Characters and if I'm out of range of Smite or Leper's Curse (and there's no enemy Psyker to Deny) this is a good alternative.

A consequence of taking Psychic Actions is that the Psyker can't cast their powers in that phase. For the current list this isn't a great tactics given I've invested CPs and a relic in making the Plaguecaster's powers stronger. I think this is a good category if a list has multiple Psykers, and it's almost worth taking a solo Termie Sorceror just to deep strike in and score Pierce the Veil.

Well that's it for this time! I hope you've found this interesting and perhaps it will help you understand how your list will influence your Secondary choices, and how Secondaries can influence list building.