Welcome back to the Vectorium! This week I've managed to play in the regular Friday night D&D game (I keep meaning to write a post regarding the ongoing antics of Immerel the Druid and his companions), preparing some new minis received from a Kickstarter (there's another post!), and starting to lay the base colours onto the next Death Guard model.

I've chosen to work on the Lord of Contagion, the absolutely brutal looking HQ from the Dark Imperium set. 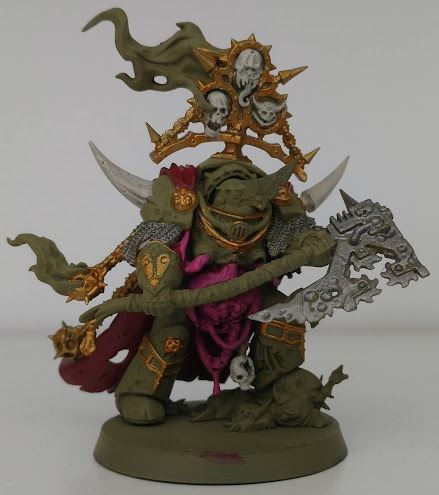 As is typical for the recent Death Guard models it's extremely busy, with a lot of details and textures. I'm been looking forward to painting this guy and I have to confess he jumped ahead of the Plague Marines which if I was more disciplined I should have started!
Rules wise he looks quite tasty with his stonky cleaver. I think he's armed with the Plague Reaper variant (basically a Plague Weapon Thunder Hammer), but I'm sure people wouldn't object to me using the Man Reaper variant which is much more infantry focused with its different profiles. We mustn't forget to apply the Contagions as these are guaranteed in assault; so against Guardsmen the Scythe Profile is 10 Attacks Strength 5 vs Toughness 2 (due to the Contagion debuff). So he'll hit on 2s, wound on 2s with re-rolls to wound! (Go with the Ferrymen Relic version and we get up to 15 attacks on the Scythe Profile).
In the new Codex the Lord of Contagion has gained the Orb of Dessication; a one use plague grenade with Damage 2. A nice bonus but nothing to rely on! One of those nasty swinging globes hanging on the chains and spreading sickly smoke will count as the Orb. 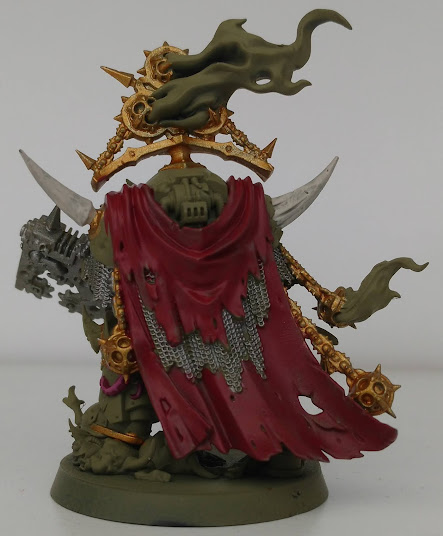 I love the fact he's squishing a hapless Nurgling. Although Nurglings can't be taken in a Death Guard detachment any more that won't stop me including some of the cheeky chaps on bases and potentially as Objective Markers. He should be fun to paint, and I'm going to name him Terence. Bonus points if you can guess why!
The Lord of Contagion has a re-roll to hit aura for Core units, and it's quite tempting to make him the Warlord and give him Arch Contaminator to give full re-roll to wounds for Plague Weapons as well. Overall he looks pretty strong as a melee fighter in his own right, and as a buff character for other units.
I've got a Video hobby night with the guys this week and I'm planning on getting some paint on the Lord (he'll need a name to; I might as well go with Gru given the minion like names I'm dishing out to other models). I'll report on progress next time.
Posted by Bryan P. at 19:14