Pestilential Painting: Whether to Weather or not?

Welcome back to the Vectorium! My intention was to spend this week's hobby time working on the next unit of Plague Marines for the expanding Death Guard collection. This did not quite work out as expected however! I'd received a few comments on the Death Guard Rhino asking whether I intended to add any further weathering and muck to the model.

In truth I wasn't overly happy with the Rhino in the state I'd left it as it did look quite light and clean in comparison to other other couple of Death Guard vehicles I'd painted (the Blight Hauler and Plague Burst Crawler). Both of those had taken washes well with their more organic curved shapes, but I wasn't convinced just slapping a load of Argrax Earthshade over the flat panelled transport would work.

A bit of time hunting through You Tube tutorials came up with an easy to try technique; stippling the grime onto the model. 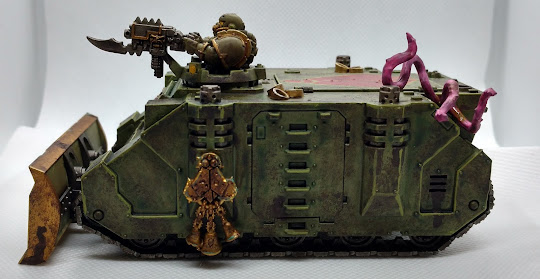 Typhus Corrosion was applied straight from the pot onto a small piece of ragged sponge (salvaged from some left over pluck foam). The majority of the paint was wiped off onto some kitchen towel (in a similar manner to dry brushing) and the Corrosion then dabbed onto the model. This was then left to dry and a second application used as desired.
The Rhino was then carefully hit with Argrax Earthshade (to avoid too much pooling on the flat panels). 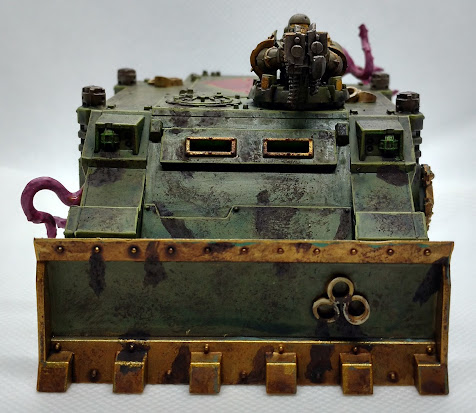 I then reapplied the edge highlights to the armour panels (Elysian Green), and the gold (Nilakh Oxide followed by Retributor Gold). 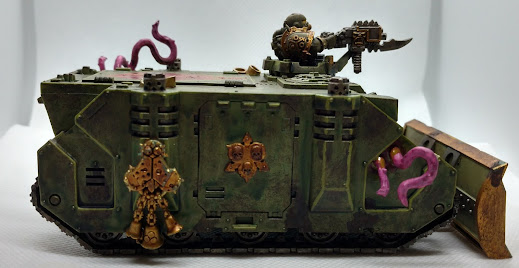 As an aside I *really* need to learn to take better photos; these have washed out the Rhino again. In reality the tank is a pretty good match for the other Nurgley vehicles now. You can see the difference the weathering has made below: 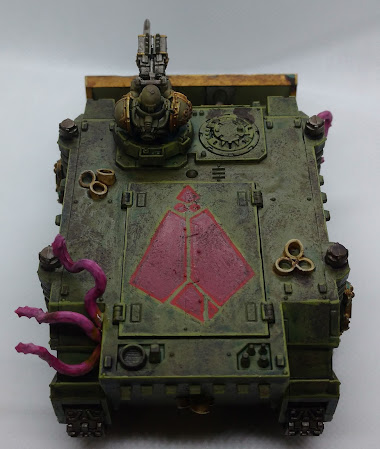 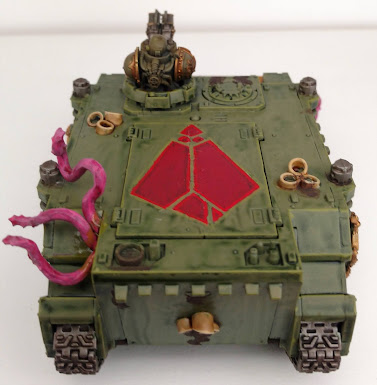 I mentioned the next Plague Marine squad earlier; I'd like to run a more melee-focused unit and I'm currently debating the following configuration:
I'd like to run these guys with a Tallyman to counter the -1 to hit penalty a lot of the multi-damage weapons incur, and make judicious use of Haze of Corruption to overspill damage on units of 1 Wound dudes (every mace wound splatting 3 guardsmen. Ouch!).
Hopefully the weather will improve soon and I set to spraying up the Plague Marines. Let's see how I get on in the next post.
Posted by Bryan P. at 19:24