Welcome back to the Officers Mess! I've mentioned in previous posts that I'm participating in the "Siege of Falx" 40K campaign at the First Founding club, with my battle hardened Cadian 82nd Regiment.

The campaign organiser (and blogger) Neil is an Ork player and massive 40K fluff fan. Last summer White Dwarf published an updated version of a classic Battle Report, "Last Stand at Glazer's Creek" in which a beleaguered Imperial Guard force fight off wave after wave of assaulting Green Skins; this article was a lot of fun to read and Neil and I have agreed to play the scenario ourselves as part of the campaign.

This is a narrative, power level based game so I've decided to add a couple of units to my collection which are more fluffy than I might usually choose!


(Yes those are Orks not Guardsmen, I thought I'd start the post with something more interesting than unpainted Cadian Infantry!)


I suspect the latter were simply ignored in the White Dwarf battle; the Ork force is determined by rolls on random tables for every wave, and so there isn't a "standard" Warlord. However, I like both the Command Point and Warlord Mechanics in 8th edition so it's probably worth kicking about some ideas on how to handle them.

Orks: The Ork player chooses one Character in each Assault Wave to be his Warlord (and also chooses his Warlord Trait).

Command Points
The Astra Militarum forces commence the Stand in good order, but become increasingly desperate as the Ork forces continue to storm their defences. The Ork assault grows in ferocity as the day wears on and the Humies start to tire (and die). 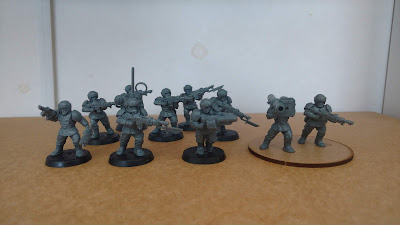 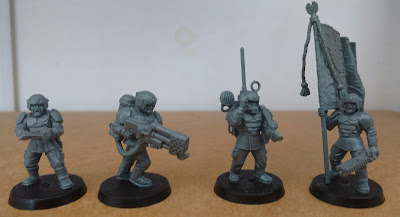 I've also started laying down the first blocks of colour on an Enginseer. If I take a tank or two for the scenario he'll be very handy in keeping the vehicles functioning. Being able to whack stuff with a big magic Axe will probably be useful to! 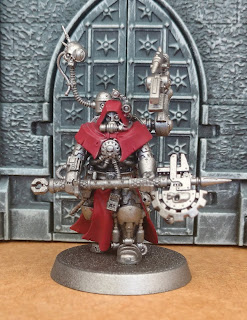 I'm really looking forward to playing this scenario. I'll keep you all appraised as progress for the game continues.

On a final note, the Vault has recently surpassed 40,000 views! I'm extremely grateful to all my readers for spending some of their precious spare time here. 40K is an auspicious number for my hobby so it seems appropriate to mark it!
Posted by Bryan P. at 20:47