Welcome back my fellow Commanders, it's time for another visit to the Officers Mess. This week has been very enjoyable hobby wise; I was invited to participate in a mid-week multi-player 40K game so I brought the Cadian 82nd along to take part. Whilst victory was not to be mine, it was great fun and change of pace to the more usual one on one fare.

I'm finding the Imperial Guard army a very different beast to the Kabal of the Sand Viper (the faction I've played most often in 8th edition), and exploring different list builds, tactics and approaches to missions is stretching my gaming brain.

So with a massive 2 games under my belt what have I learnt. First up, people really don't like the Mortar Squads. Secondly I really like Mortar Squads; they are dirt cheap, and whilst not having a massive damage output, the ability to shoot with out Line of Sight is incredibly useful.

(As an aside I've been painting up the Mortar Squads. I had a single Mortar Team completed for 7th edition used as part of a cheapy ObSec Platoon Command Squad and now I have two whole squads. The models are all done bar the basing). 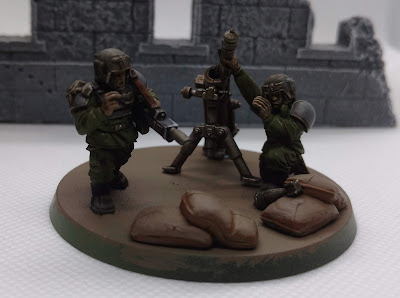 One of my opponents was a playing an Alatoic Craftworld Eldar force which presents a real challenge to the Imperial Guard as a lot of the enemy units are either -1 or -2 to be hit from shooting, potentially going to a -3 if Lightning Reflexes is played. Most Imperial Guard units are a base 4+ to hit, so the odds of landing any sort of meaningful punch soon diminish. Whilst the Imperial Guard don't have as much access to the plethora of re-roll bubbles available to Space Marines, there are a few tricks available to a canny Colonel and I will be building some of these into my future lists.

The most likely of which will be a second Hell Hound with its Inferno Cannon . 2d6 automatic hits, with decent Str and AP is great. It also combo's well with Overlapping Fields of Fire, which gives a bonus to subsequent shooting. 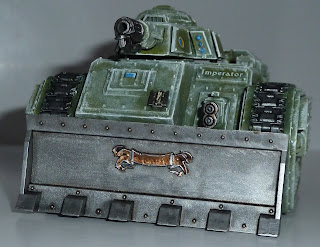 I'm also considering using a Callidus Assassin; the ability to steal Command Points (i.e. force the cost of those annoying Stratagems to go up), and then go after support characters seems very good on paper.
I'm also looking into some of the Astra Militarum support characters. The ability to heal or repair models is very useful and I've used Jury Rig to return Tanks to higher damage brackets and mitigate some of the penalties they have incurred. A Tech-Priest Enginseer may be a good investment as the tank can still move (it may not if it's Jury Rigged), and the Enginseer repairs more damage at no CP cost.

The Astropath has been a solid investment as well; making a key unit -1 to be hit is great (as mentioned earlier!), as is access to a cheeky Deny The Witch.

I've been less impressed with the small Scion squad I've been using; I've equipped it with 2 plasma guns, but it doesn't make much impact when dropped in from reserves and invariably gets blown off the table next turn. I'm tempted to try the squad "bare bones" just for grabbing Objectives and Line Breaker and investing the spare points elsewhere. 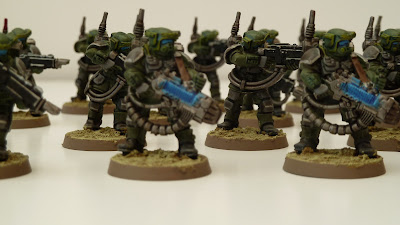 So, there's plenty of planning going on at 82nd Command at the moment; there is a Planetary Empires campaign starting at First Founding soon, so I'll be mustering the troops for when the balloon goes up.

I'll leave you with a parting shot of the Mortars Teams fresh from the painting bench. Excuse the wonky positioning of the Mortars themselves, they are just blu-tac'ed in place until I get the basing done. 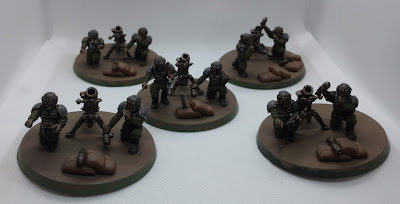