The Kabal of the Sand Viper have returned from another Real Space Raid; this time to First Founding's Octoberfest 18 tournament. The Dark Eldar experienced a mix set of results, as we shall see! 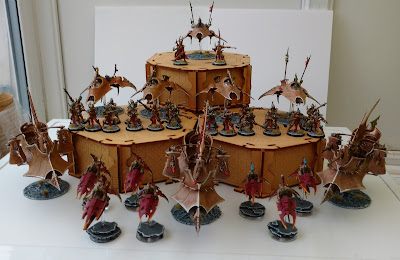 Octoberfest is a 1250 point, one day, 4 game event. The Army Composition rules have a few twists compared to standard matched play, as do the missions. As usual I've got a few pictures and some thoughts for each game.

Game 1: Secure & Control (Eternal War) & Cleanse & Capture (Maelstrom)
This mission is fast becoming a regular in the club tournament portfolio; the mission is a combination of both Eternal War and Maelstrom with the Away Eternal War objective being worth more points to the player than his Home.

In a repeat of Game 1 from Mayhem earlier this year I'm playing against Greg who has also brought along a shiny new Ad Mech force.

I deploy on a couple of flanks, making use of the liberal cover on this table, whilst the Ad Mech deploy in a fairly conservative castle with some Robots and Calidus Assassin in reserve.

In true Dark Eldar fashion I swing my gun boats to one flank and mass fire whilst hopefully limiting the return fire on the following turn. The Dark Eldar shooting is successful. 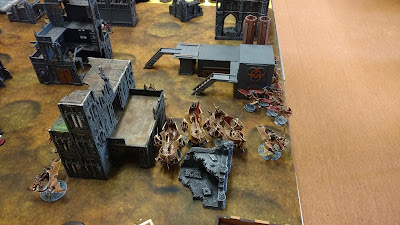 The Ad Mech's other flank swings round the centre of the castle to attempt to engage the Dark Eldar: 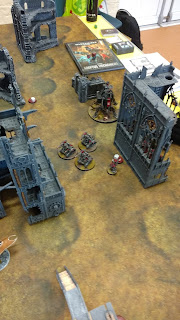 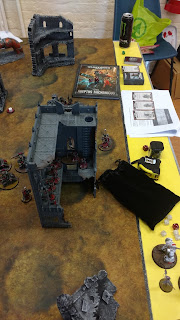 The block of Ravagers swings round to return fire. I'd been worried about the Battle Bots deep striking into my home objective, but they reinforced the Ad Mech's base whilst the Assassin attempted to sneak attack the Archon guiding the Gun Boats. 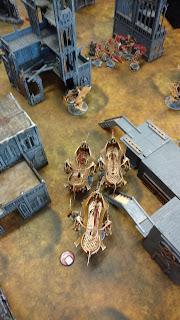 The Dark Eldar deal with the Assassin and continue to apply pressure to the Ad Mech forces. Both forces attempt to claim Maelstrom points where they can. 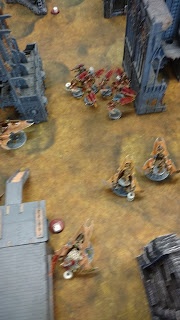 As the game comes to an end, Kabalite Warriors stand on the Mechanicum's objective whilst holding their own.

Game 2: Domination
This mission involves 6 preset objectives (2 in each deployment zone and 2 in no mans land) which are scored progressively from turn 2 onward. I am playing against Dave's Ultramarine's list which comprised a plethora of HQs (Chapter Master, Librarian, Tech Marine), a mix of Tactical Marines, Scouts and Veterans and a Spartan Tank!

The Spartan is a beast! 8 Lascannons buffed with Chapter Master re-rolls and Might of Heroes courtesy of the Librarian and Tech Marine heals. I utterly failed to make a dent on the Spartan and after both my Dark Lance Ravagers were destroyed I needed to concentrate on killing the Ultramarine troops and maximise my progressive scoring.

To add insult to injury both Ravagers exploded! I CP re-rolled one to avoid the gun boat going boom which with hindsight was a good idea; having two lots of 2d3 mortal wounds going off in that cluster of units would have been a nightmare! 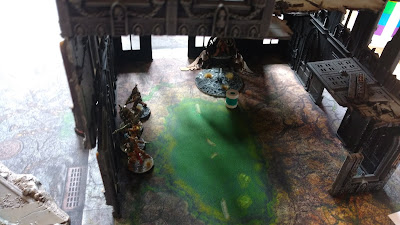 In the end the Dark Eldar squeak just ahead on the progressive scoring.

Game 3: Dust to Dust
This is another mission with present objective markers (5 in this case, 1 in each quarter and one in the centre), but these are scored at the end of the game, with troops scoring a bonus VP.

In another repeat from Mayhem I find myself on Table 1 (a beautiful Forge World Realm of Battle table, including crashed Thunderhawk), against Joe's Blood Angels. This is a funky list; 5 unit of Primaris Intercessors, some Sanguinary Guard, Death Company and a variety of characters (Feel No Pain Banner carrying Ancient, Primaris Captain, and Smash Captain).

The Blood Angels deploy en masse on the Wall of Martyrs: 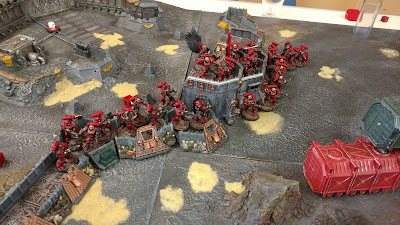 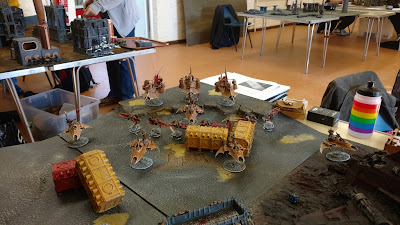 With little cover to hide behind, and potential early game shenanigans from Death Company and Sanguinary Guard I screen the all important Ravagers. The Blood Angel jump troops go into reserve (bar Captain Smash) and I take first turn. 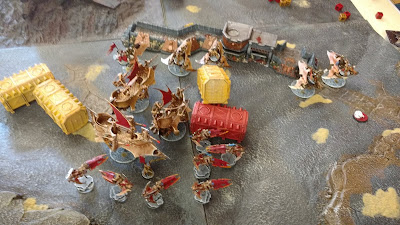 I move the Gun Boats and light up the Primaris Troops, knocking out a couple of squads. I also make a game losing mistake. Whilst I don't have to worry about the troops in reserve this turn I forgot about Captain Smash, and leave my left flank open. On the Blood Angel's turn, the Cap redeploys, charges into two Ravagers, spend an ungodly number of Command Points and kills them both. This is bad!

In the mean time the Blood Angels advance forward. 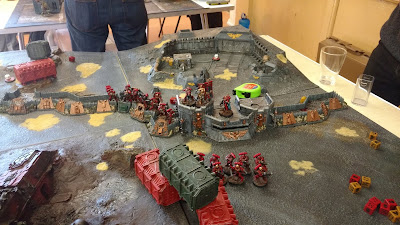 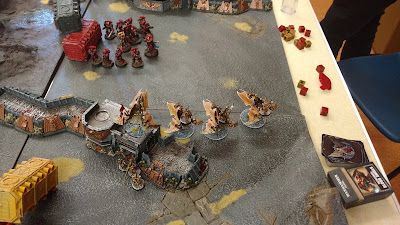 And the Reavers move back to the left, hoping to split Blood Angel attention and to possibly get into the back line later game. 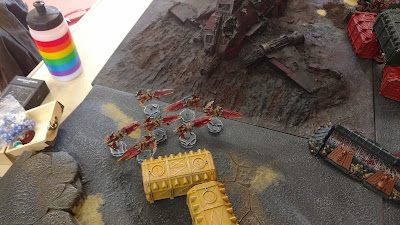 The Blood Angels continue their advance, and their Reserves appear. Whilst the Sanguinary Guard are dealt with, the Death Company can't be contained. 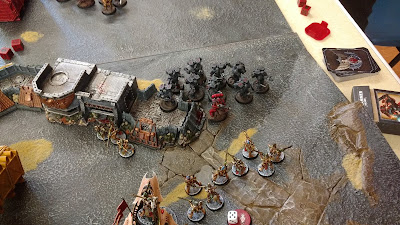 In the closing turn of the game the Dark Eldar are holding two objectives to the Blood Angels one, however I think I make a final game losing mistake; I don't assault the Death Company with my bikes. This is important as I'm holding the objective with Ob Sec Warriors. If I'd taken down a couple of Death Company I would have improved my odds of the Warriors surviving (only needing one to claim). Alas the Warriors die, and the Death Company take the hill.

Game 3: The Relics
Another First Founding favourite mission; triple Relics! This is almost another repeat from Mayhem, as I find myself playing Game 4 against a Sisters of Battle player named Paul. But this is a different Paul; my long time gaming buddy and nemesis Paul D!

I win the roll for Turn 1 and in what is quite frankly the most satisfying moment of 8th edition so far I delete every single heavy bolter from the table. I hate those bloody units with a passion! 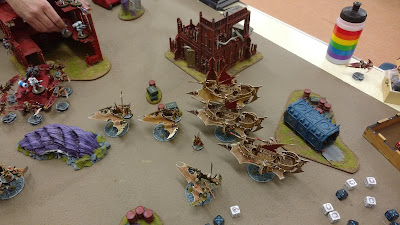 I surround an Immolator in an attempt to trap all it's melta wielding passengers if I successfully pop it with Dark Lances (which I don't!).  With hindsight this was probably another screening mistake; I perhaps should have left the bikers to bubble wrap my Ravagers as the fusion wielding Seraphim and Celestine soon got in and caused havoc.

The start of the Sisters move can be seen: 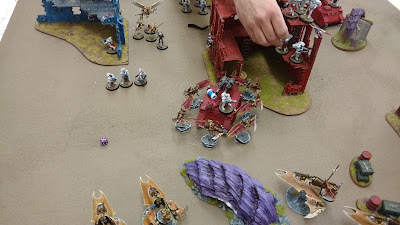 And the consequences on an unchecked Celestine can be seen. To be fair I did kill her once, but she decided that she didn't like being dead and re-spawned. Great. 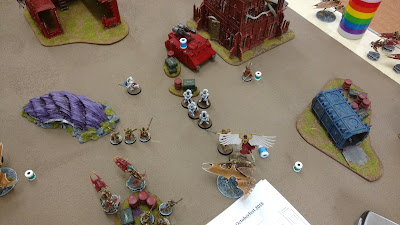 Once again I found myself at 2 & 2 having flirted with the top table. At my current play level I'm not playing well enough to win the latter games, but there are a few things I've taken away from the day:


I'll finish up with some pictures of some of the other armies. I didn't record every army but did get a good spread:

Hope you've enjoyed the eye candy and some of the words; there will be more from the Kabal of the Sand Viper soon!
Posted by Bryan P. at 21:39