Welcome back to the Vault my fellow commanders as this time we are literally jumping out of the Void; in this post I'd like to talk a little bit about my experiences using Vanguard Veterans in my Carcharodons Astra 40K army.


I am running 2 units of these Jump Pack equipped infantry; a large unit armed with dual Lightning Claws and a smaller unit armed with plasma pistols and chain/power swords. Here's a few thoughts from the games I've played so far:


The biggest challenge to using the Vanguard Veterans is actually positioning them correctly in assaults; I've had multiple occasions where I have not used the all the movement available to my jump troopers effectively and this has cost me (some times costing me the whole unit). A really good example is Trapping enemy units; this is where you want to surround enemy units which you won't necessarily kill in a single assault phase to prevent them from falling back.

To give you an idea here is a simple set up based on one of my recent games. I tried to pin a pair of Ultramarine Lascannon/Missile Dreadnoughts to prevent them from shooting. I mucked it up! (Excuse the models, and don't worry about the armaments, it's the positioning that is important).

The Assault Marines want to charge the 2 Dreadnoughts. We'll ignore over watch as we want to focus on the movements: 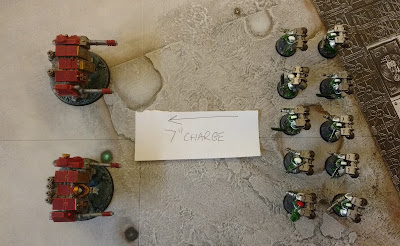 And we roll the charge dice. 7! We are good: 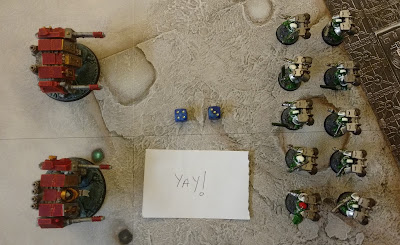 OK. This is where we get lazy/sloppy. Just move up to 7" and then get straight into battering each other in the Fight Phase. Bad Varchilde! 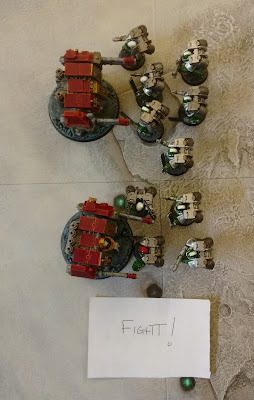 Opponents Turn: He's got a clear path away from the Assault Marines; the Dreadnoughts can Fall Back. 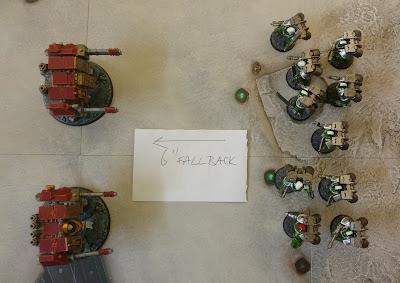 The Assault Marines are now in the open and can be shot at. (In my game I forgot that Ultramarines can Fall Back and shoot, the Smurfy Dreads even joined in the fun!) 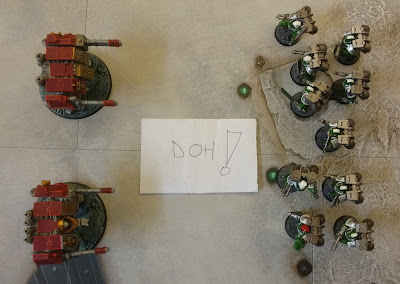 Lets rewind the scenario and have another go! 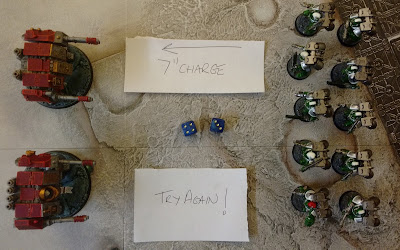 Again we'll ignore overwatch for simplicity. First charger must move within 1" of a model in a target unit. 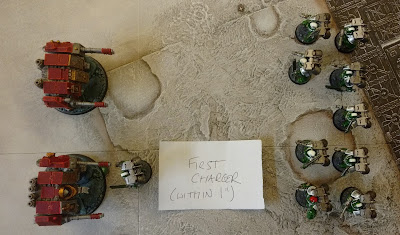 Remaining models charge. The only restriction is they must in in coherency. We are starting to stretch out as we want to move around the Dreddys! 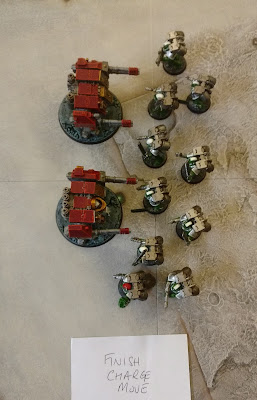 Now things get more interesting. When the Assault Marines activate in the Fight phase they can move up to 3" (provided they end up closer to the closest model). Here the marines loop around and through the Dreadnoughts (up to 3") and in this case end up in base to base. 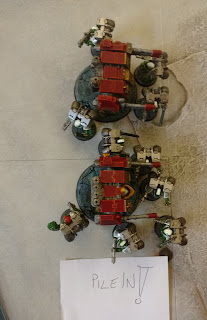 If we need extra movement we can keep the Assault Marines out of base to base contact and then pull the same trick with Consolidate moves (i.e. there's up to 6" of free movement to play with in the Fight Phase)!

Come the Dreadnoughts turn they cannot move in any direction without moving through the Assault Marines; they are trapped and cannot Fall Back. Mission Successful! We can even afford to take some casualties and keep the trap in place. 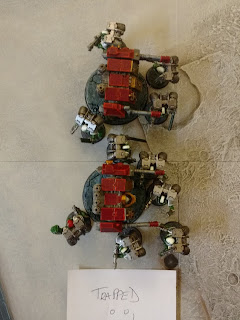 Now all I've got to do is remember to put this advice into practice. Luckily I've got two more games planned in the next week! I'll report back soon.
Posted by Bryan P. at 21:36