Frostgrave: Acererak and The Ragged Court

The First Founding Frostgrave campaign ("The Rune Stone Race")  kicks off in a couple of weeks, and with bonus XP on offer for having both a painted war band and a back story I've been spending some hobby time on mine. I'd be setting a bad example (since I'm running the campaign) if I didn't qualify for the bonuses.

As an aside today (4 March) happens to be Gary Gygax Day, so I've drawn inspiration from the classic S1 Tomb of Horrors; I present Acererak and The Ragged Court:


Acererak slept for hundreds of years as Felstad lay under ice. As the city thawed, Acererak awoke; or rather a sliver of Acererak awoke. Acererak the Liche was no more, and all that remains was an echo; a memory of the Undead Wizard's magic bound to one of his phylacteries - a simple grinning skull.

The skull was found among the thawing melt water by a destitute and desperate treasure seeker, drawn by the flickering ghost light in the eye sockets. Unaware of the danger, the poor soul picked up his trophy and Acererak asserted his will upon him; the enthralled man became the first of Acererak's minions and the conduit for his spell casting power.

Acererak wasted no time in recruiting and dominating other street rats among Felstad's shadows; key among them is Morlock, a gutter snipe with a smattering of a talent for magic who Acererak has taken as an apprentice.

This vicious rabble, The Ragged Court, can often be found combing the ruins of the Frozen City, looking for gold, magical lore, and Acererak hopes, a way to restore his former prowess and glory!

I painted most of this war band some time ago as an exercise in speed painting (the majority of the figures were painted over the course of watching a movie - Stardust - great film), but I painted the Infantry Men and the Warhounds today to fill out an alternative starting roster, and give some more options.

The majority of the models are of course plastic Frostgrave Cultists,including Acererak and Morlock who are conversions from the kit, and the Infantry Men have weapons from the Frostgrave Barbarians kit. The Warhounds are Wizkids Blink Dogs; they fit the feel of the war band quite well.

The Ragged Court played in a demo game at the club last Friday, where alas they did not fare very well (taking 5 casualties in the game and losing 4-2 on treasures). Perhaps with a name, back story and reinforcements they will fare better next time! 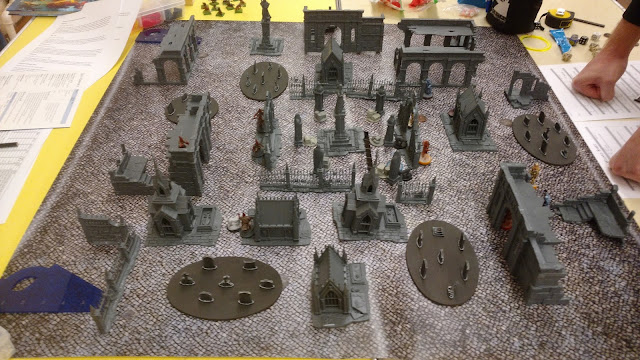 Thanks for reading and I'll see you in Felstad again soon!