Welcome back to the Vectorium once more! Today's post will be fairly brief as I have to confess the lure of lighter evenings and sunny days has kept me outside and away from playing games (bar the weekly D&D) and the painting desk.

I have taken the opportunity to prime the next set of Death Guard models; a set of Elite Characters which can be fielded collectively on the tabletop as the Foetid Virion. (This suitably nurgley-gothicy term simply means a Death Guard force can field up to 3 such characters in a single elite choice provided each is unique).

First up is the Tallyman. 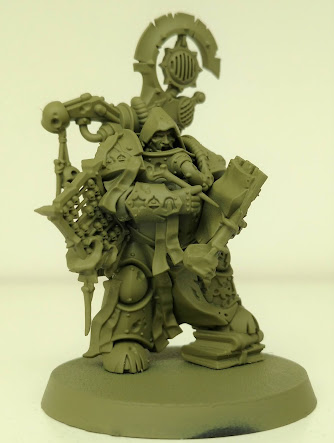 The idea of an Officer being dedicated to recording infections, kills, outbreaks and so on is very 40K and very bonkers. I happen to also love this sculpt; it is one of my favourite models in the Death Guard range.
Once you add in the fact he has a solid set of abilities in game (the capability to generate additional Command Points and to buff Core units with a to hit bonus), and I think he'll be a bit of a must have once I finally get to play a game (more on that later...)
Next is the Noxious Blightbringer. 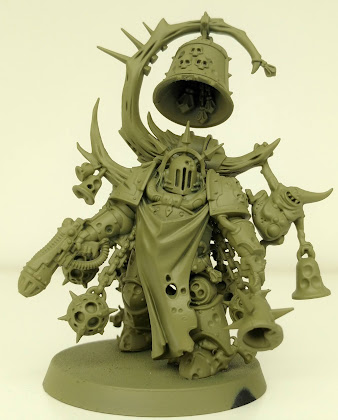 Yes you did see that correctly. If going to war with an abacus and an accounts ledger wasn't 40K enough, how about BLOODY GREAT BELL dangling from a BLOODY GREAT ANTLER. Oh and let's not forget more bells, some censers, and a 10,000 year old plasma pistol. And a minor deamon with a bell.
I didn't like this model when it was first released but it has really grown on me, as I've painted other Death Guard models and come to appreciate all the design touches on them which are just so more overt on the Blightbringer.
This model's abilities are quite interesting:
The latter two abilities are situational, but the movement bonus is quite tasty for a slow moving army like the Death Guard. There are also some leadership tricks in the Codex so he's certainly worth playing about with.
In addition to his pistol, the Blightbringer is armed with a Cursed Plague Bell, a Damage 2 melee weapon. I think this is meant to be represented by the bell in his left hand, but I love the idea of him slapping about enemies with the BLOODY GREAT BELL.
The final member of the trio is the Biologus Putrifier: 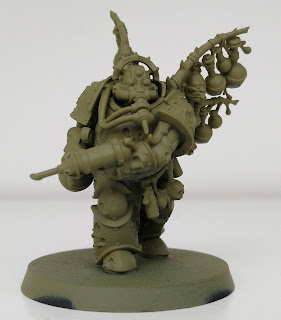 Who doesn't appreciate a mad scientist hell bent on developing fiendish plagues and poxes?
"Shall we release them via an appropriately high tech means?" "Nope, let's just lob a glass bottle of filth at some hapless victim!"
You don't want to get too close if those vials on his back get broken.
This is another sculpt I really like; from the purposeful stride towards his enemy, down to the insect like proboscis on his helm. In fact it's worth another view of this guy: 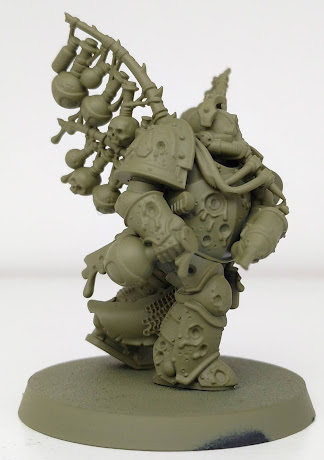 Just a cracking model.
His rules are pretty strong as well:
The Putrifier's own grenades come with the buff built in, and he also has a short range pistol capable of inflicting mortal wounds. Combining it with Overwhelming Generosity (a 1CP stratagem) gives him a smite-like capability.
I've enjoyed taking the time to appreciate the details on the Foetid Virion models; these should be a lot of fun to paint, and I'll share the progress in future posts.
Posted by Bryan P. at 16:46