Welcome to back to the Vault fellow Grand Masters! The weather this week has been glorious but detrimental to painting; i.e. far too hot! Undaunted however I have played another "Learning 9th edition" game with Dave G, and I decided to bring the Grey Knights out for a spin across the table top.

This will be something of a rambling post as it will give me an opportunity to capture some thoughts and good ideas for future games. I hope you might get some benefit from the thoughts as well. 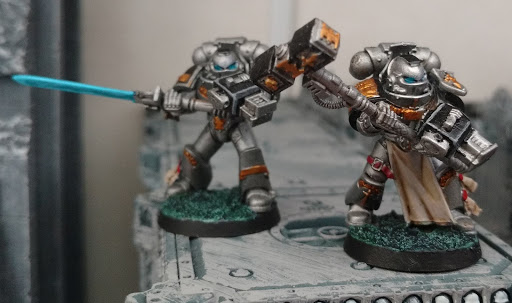 The first task of course was to write a list; I spent a fun hour or so pulling my Grey Knight models out of storage and pointing them up using the 9th edition costs. Turns out I have almost four and a half thousand points, most of which is painted. That gives quite a lot of choice for army building!

We had agreed on a 1500 point Strike Force game, and I had a few objectives in mind: 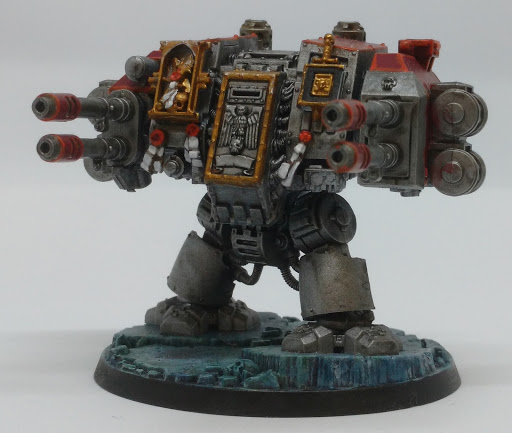 There were some things I just couldn't afford to squeeze in that I'll try out in future games:
So what about the game? We played "The Scouring" where players score points based on controlling Objectives at the end of each of their second and subsequent Command Phases compared to how many their opponent controls; hence the need for durable units to sit on the board.
Dave played a Word Bearers list consisting of 2 Daemon Engines (a Lord Discordant and Venom Crawler), 4 units of cheap troops (Chaos Marines and Cultists), 2 very killy squads of Possessed in Rhinos and a throng of supporting Characters (Dark Apostle, Sorceror and Master of Possession).
Having swapped lists we then had to choose Secondary Objectives; these are other means of achieving Victory Points in addition to the mission Primary. This looks like it will be an important element of 9th edition since choosing the wrong secondaries can seriously muck up your chance of earning points!
An interesting twist is that some secondaries require units to take "actions" (i.e. do something instead of fight, shoot, etc.) The Scouring has a unique secondary where units can "scan" objectives each turn, and the player earns points depending on how many different objectives he has scanned at the end of the game.
I'd  discussed my list with a fellow player since he'd played some 9th ed games and he'd advised not taking Psychic action secondaries since the Grey Knights need to be casting powers.  For an elite army like my selection I think most action based secondaries are a trap; those 200 point units need to be casting, shooting and fighting not pulling levers or raising banners!
The Word Bearers could afford to choose such secondaries given the inclusion of cheap Troops units; it's going to be interesting to see how army lists will influence people's secondary selections and vice versa.
For the record I chose:
If I recall correctly the Word Bearers chose Domination, Cut off the Head (aka Slay the Warlord), and Investigate Sites (an Infantry unit takes an action within 6" of the centre of the board provided no enemy units are within 6" of the centre). With hindsight that was probably a poor choice as we squabbled over the centre of the board for most of the game!
The game resulted in a win for the Grey Knights; the Word Bearers made an early start on Primaries, but the Sons of Titans cut through the supporting Troops and Daemon Engines and whilst the Possessed ripped apart a squad of Terminators and the Dread Knight, Damage 4 Smites(!) made short work of them, leaving the field for the Grey Knights.
Learning points for future games;
That's it for today; back with more Grey Knights musings next time!
Posted by Bryan P. at 20:41