Welcome back to the Vault once more dear Venturers.  One of the aspects of 40K I like to dabble with is Mission design; I've written a couple of narrative scenarios on the blog (Deathwatch vs Dark Angels and Guard vs Orks) as well as more competitive missions for the Club events (Give No Quarter doubles and Tactical Gambit).

Update; this mission didn't make the cut for Octoberfest, and so has been play tested for the Club's 2020 Doubles event.

The club's Octoberfest Doubles tournament will soon be upon us, and I've been asked by the event organiser to come up with another mission within the following bounds:

I have recollections of a cool mission from the old Cities of Death supplement where forces moved across the ruins of a city "tagging" buildings, before moving onto the next. Opposing forces could reclaim buildings by occupying them and so the control of the battle field would ebb and flow.  I'd like to get something like that into this new scenario.

So here is my take on it:

Fire Sweep
Deployment: Front-line Assault (aka Pointy Dawn of War).
Game Length: Set; 6 turns.
Acceptable Casualties: The Matched Play rules for Sudden Death are not in use in this mission
First Turn: The teams roll off and the winner selects their deployment zone.  The losing team then deploy their entire army, followed by the winning team.  The losing team then decides whether to take the first turn or not. Seize the initiative as usual to take the first turn.

Primary Objectives: 1 Objective is placed in the centre of the board. 4 other Objectives are placed 1 per table quarter so they are 18" from the short board edge and 15" from the long board edge.

Additionally Slay the Warlord and Linebreaker provide 1 VP each.

The intention is that Troops can move onto an objective, tag it, then continue to advance forward rather than necessarily have to sit on it all game! 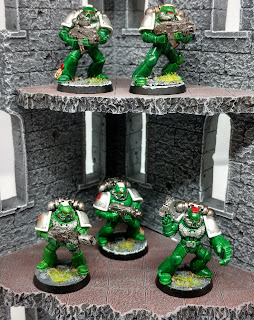 A simple scoring example: a Tactical Squad controls an objective at the end of Battle Round 1, places a marker and the Marine player earns 2 VP.  The Tactical Squad subsequently move off the objective, and his opponent does not claim it.  At the end of Battle Round 2 the marked objective is considered as controlled by a non-Troop choice and the Marine Player earns a further 1 VP.  In the next round his Chaos opponent controls the objective with a unit of Raptors (Fast Attack), the Marine's marker is removed and the Chaos player earns 1 VP but no marker is placed on the objective.
Posted by Bryan P. at 20:17