Many posts ago I wrote a narrative Warhammer 40,000 scenario that pitted Kanan's Dark Angels against my Death Watch. It was a lot of fun to play, and at the time I offered to write a similar scenario for any of my regular opponents. Neil from Table Standard took me up on the offer, and I've utterly failed to make good on it.

Until this post! Neil and I have played a number of times before but my favourite encounter has been when his Orks and my Imperial Guard have faced each other. So here's a narrative grudge match; Da Sword in Da Stone!


The sound of the multiple detonations and the subsequent rockfall in the deep ravine echoed around the hills like thunder. Boss Snikrot grinned; the stupid humies had fallen for his trap.

The Fighta Bomba screamed overhead narrowly avoiding the Hydra flak fire from below. The pilot took in the sights below him, trapped by the avalanche within the gorge was the massive Imperial Tank, the crew seemingly shocked and dazed. A mighty prize just ripe for the looting!

Ork Boyz charged forward, the Waagh upon them, seeking to slaughter the humie soldiers still reeling from the ambush. The Big Mek took a more measured approach, eyes gleaming at the prize almost within his grasp

-x-
"Incoming! Incoming! Incoming! Fire Support requested at Charlie Four Niner!" Officers barked Orders and Voxes crackled as the Cadians rallied in response to the Xeno attack. Initial casualty reports were light but a Green Tide had been spotted rising from the foot hills.

Tech Priest Arkanus intoned the litanies of repairing but Shadow Sword Excalibur's Machine Spirit was displeased. This was no honourable battle; damage reports will still being assessed. Arkanus repeated the canticle with more urgency; this mighty relic could not fall to such wretched foes.

The Armies
Each player selects a Battle-forged army to an agreed Power Level.

Neither player may utilize Fortifications in their armies.

The Battlefield
The battle takes place in a mountainous area; there should be plenty of hills/rocky outcrops on the table. There is a path approximately 12" wide winding through the hills, which runs along the centre of the map aligned to the short board edge.

A Shadow Sword (or similarly impressive )model is placed in the centre of the board, facing in the direction of the path. Small pieces of area terrain representing the rock fall of the Orks ambush should be placed around the Shadow Sword.

The Scenario uses the Front Line Assault deployment map (rule book p.217) on a 6' by 4' table.  The players roll off - who ever rolls highest chooses his deployment zone, whilst his opponent uses the opposite zone. 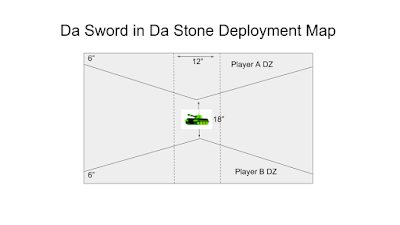 The players then start alternate deploying their units, one at a time, starting with the player who did not choose their deployment zone. A player's models must be set up within their own deployment zone. Continue setting up until both sides have set up their army.

First Turn
The players roll off - who ever rolls highest may choose whether to go first or second. The player who finished deployment first adds one to his roll. If the winner decides to go first his opponent can roll a die and on a 6 seize the initiative, taking the first turn instead!

Hopefully Neil and I will get to play this soon with plenty of pics to share afterwards!
Posted by Bryan P. at 20:18