Power from Paint: The Spirit Prophet

Welcome back to the Vault my fellow Archons; today we visit the darkest halls of Commorragh's Covens.

It is well known among the Dark Kin that the Haemonculi of the Prophets of Flesh foretell the future from the suffering of others; reading the runes revealed in Dark Eldar raids and battles, as well as other more esoteric and exotic forms of flesh crafting. One of the rarer forms of soothsaying is that of Spirimancy, and it's adherents are named the Spirit Prophets. 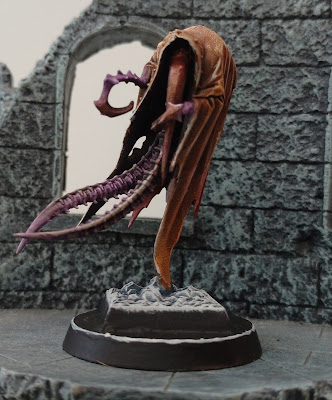 The Spirit Prophets practice a form of body transformation considered extreme even among the Haemonculi; they graft a Spirit Probe so that they might directly absorb the life force of their hapless victims and in doing so reveal visions with great clarity. Such a prize is not without cost, and as the Haemonculi absorb greater amounts of spirit energy, they begin to fade becoming almost Wraith-like Spectres.

I've had a lot of fun building and painting the Spirit Prophet. I'm sure many of you will recognise the base model as a Vampire Counts Cairn Wraith, a kit which has inspired many different conversions in the pages of White Dwarf and so on. The Cairn Wraith is one of a number of iconic GW kits whose aesthetics just scream Warhammer Fantasy and Warhammer 40,000.

The model is a simple conversion using a couple of left over tentacles and a Spirit Probe from a Talos/Cronos and a couple of hooky hand bitz taken from a Wracks kit (actually snipped from the boney-antlers). Once built the kit was primed black, and then given a brown, then white zenith highlight: 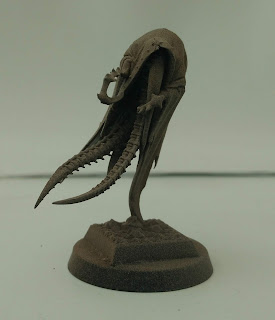 The paint scheme itself is very straight forward using the usual recipe for my Dark Eldar:
Finally there's a liberal application of various washes to the model. Here's the Spirit Prophet from various other angles:


One aspect of this project I really like is that there's a certain ambiguity to the model; we know it's a Haemonculus because we've learnt that from it's narrative (and will join my Dark Eldar army as such). It could easily be an Admech creation of some-sort with a different paint scheme (a Tek-Wraith?), or something else entirely. However, there is no doubt (in my mind at least) that it does have a home somewhere in the 40K universe.

One of my favourite regulars in White Dwarf is Blanchitsu, which explores models and settings inspired by John Blanche's art and projects. You won't see regular Space Marines, or Tau, or Eldar; Blanchitsu is the home of lowly Imperial Pilgrims, and the Lost and the Damned. I'm intending to slowly work on a similarly free-form set of models myself, and whilst they won't conform to a Codex-army list I'm hoping to do some sort of skirmish gaming with them (if I can find some other suitably minded Lost Souls). Who knows perhaps the Spirit Prophet will join them?

As always thanks for reading and I'll see you back in the Vault again soon!
Posted by Bryan P. at 19:31