Session Four begins as our heroes continue their investigation of the seemingly haunted Dark Eye Tower. The party had previously encountered and fought a number of Fire Beetles nesting in the ruined upper levels of the Tower; and it seems the strange lights seen at night were in fact from the Beetle's glowing antennas. In fact a careful search of the upper levels did not reveal any further activity.

Back on the ground level the party focus their attention on the door to the north of the chamber where they had battled the beetles and the spectre had disappeared; there are sounds of frenzied animal activity coming from beyond. The characters ready themselves for further battle and open the door. Beyond are a number of enormous rats; obviously distressed by the passing of the ghost! 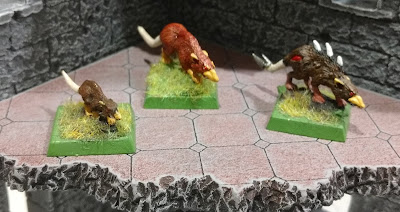 Cade casts a timely Sleep spell, rendering most of the beasts unconscious whilst one goes beserk gnawing chunks out of Goro the dwarf. A brief combat ensues and the rat is slain. Exploring the chamber beyond the party find a crack in the wall (through which the rats have entered to find shelter in the ruins), and a trapdoor leading to a cellar below.

(Note all the maps in the post are created by Dyson's Logos and are made available for non-commercial use. Check out his stuff here).

Map One; the Ground Level of Dark Eye Tower: 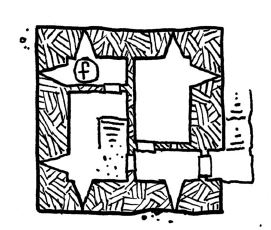 Map Two: the upper levels of the Tower, showing where the building has started falling into ruin: 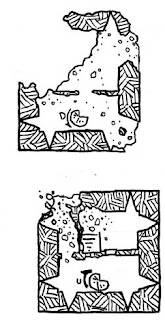 At this point the party return to their homes to rest up and recuperate before returning on the next evening. Cade is happy to spend the night at Nanny Ogg's cottage given he still has a Stirge infestation to resolve!

The characters descend into the cellar, encountering a large chamber used to hold supplies for the garrison (long since emptied of anything of value). There does not appear to be any exit out of the room apart from the trapdoor to return to the Tower above. 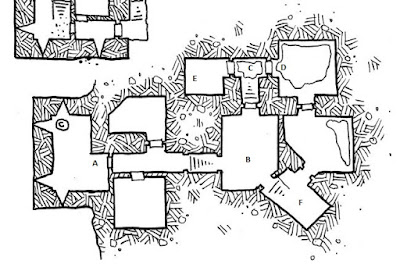 (Ignore the arrow slits on this level; the entire chamber is under ground).

The eastern wall of the L-shaped chamber is blank whilst the others are fitted with shelving; Nanny Ogg searches for secret doors and finds a door hidden behind the wall; the real wall has been hidden by a cunning illusion (A)!

Nanny Ogg opens the door revealing a corridor beyond, at the same time a ghostly shimmering Mace appears in the air which attempts to bludgeon the poor mage. She retreats back into the chamber, chased by the apparition. Recognising the Mace as a Spiritual Weapon several of the characters advance into the corridor seeking the cleric who must have cast it! There is no immediate sign of such a villain, and after the Mace gives Nanny Ogg a whack on the head rendering her unconscious it disappears. The wizard is soon healed back to health.

A search of the corridor beyond reveals two chambers (a mess and barracks) long abandoned and disused; heading down the steps beyond the party encounter 4 skeletons (B) dressed in armour and armed with spears and shields. In Harryhausen style they animate and attack the party. 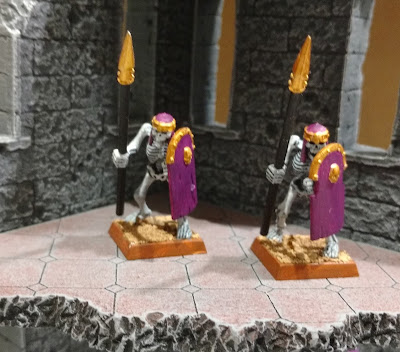 The party are getting used to battle, and whilst Juan's Turning attempt fails, the Undead are soon disposed of. The party head north, heading down the stairs to a T-junction (C), where water is pooling on the floor and the ceiling is suffering from a partial collapse.  Scuttling noises can be faintly heard from the ceiling above. A Light spell is cast on a stone and thrown into the water, illuminating the junction, and the scuttling sound disappears.

The characters open the door to the left revealing a chamber empty save for a strange obsidian like stone growing out of the western wall (E). An eight pointed start is carved into the obsidian and as Juan approaches he feels a strange almost magnetic attraction to it. The party wisely leave the room for now.

Opening the opposite door reveals a chamber in ruin; the dungeon construction has suffered from subsidence and there is water throughout the room. Above the doorway (D) is a strange pulsing green ooze which Goro recognises as Green Slime! The party decide to return the central chamber and advance down the stairs to the south east.

The diagonal chamber is empty save a small travelling altar set up on a stone block (F); it comprises a pair of silver candlesticks, an offering bowl carved with the eight pointed star and a sacrificial knife! Also set up on the altar is a grinning mummified head; it's features reminiscent of the ghostly labourer who had drawn the party here.  Although there is material value in the silver altar-ware the party wish to destroy it; Goro mentions that Green Slime can destroy metal and so the goods are taken to the chamber where they hope the slime will drop onto it.

The final eastern chamber is also in ruin; the collapse of the structure is obviously quite extensive in this part of the complex. The party return to the surface taking the labourer's head with them so they can give it a decent burial and burdened with many questions about the strange events they have uncovered.
Posted by Bryan P. at 18:34