Power Armoured Paint: In Defence of the Tactical Marine

Welcome back to the Vault once again my fellow Venturers!  This post is another journey to Warhammer 40,000's Grim Dark Future, and I'd like to talk about one of the most maligned of units; the Space Marine Tactical Squad.

This post is fairly timely for a few reasons:
My regular 40K opponents know that Space Marines were my first army (my beloved Lightbringers); Tactical Marines were the first models I painted and I still use some of those venerable toy soldiers in my lists: 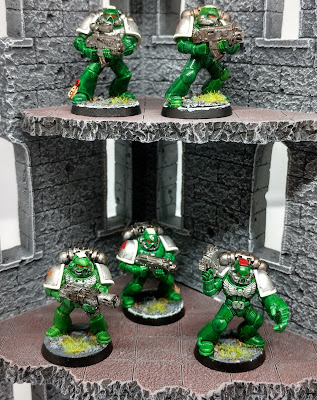 Oh how I remember my foolishness of 4th edition; Power Fists on Tactical Sergeants! My squad upgrades have changed over the years: Sergeants have sent the Power Fists back to the armoury: 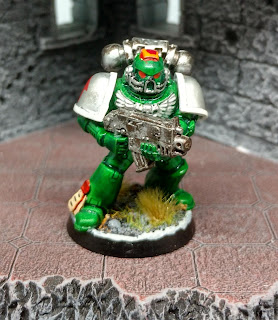 And the Gunners have been armed with a variety of shooty toys: 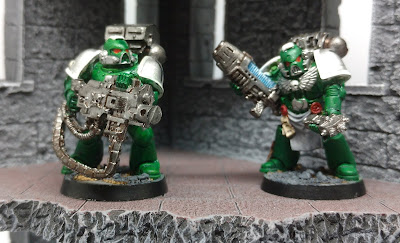 Enough of the nostalgia! Let's talk about 8th edition and how my Space Marine lists might look in the future. In 8th Ed we needn't take a single Troop choice thanks to the various Detachments on offer, so why take bother with Troops at all?  There's two main reasons I can see:
So let's make a couple of basic assumptions; you are taking a Space Marine heavy list, and you want Troop choices. This works for me for a couple of reasons:
One way to compare the Troop choices is to use Math Hammer; with this technique we can see that Scouts are more efficient in both shooting or assault point for point compared to Tactical Squads (i.e. bolter or pistol/combat blade armed Scouts), and Intercessors are more durable but I would argue that we can't just take this analysis in a vacuum.

The units in an army list need a purpose, i.e. a role to accomplish, and the different unit choices can each take different roles. I use Scouts in my Carcharadons Astra force to clear landing zones for my deep striking units and then to cap objectives; their damage output is mediocre, but they are dirt cheap!

Scouts can also sit back field and provide long range fire support with Sniper Rifles, Missile Launchers or Heavy Bolters; just like these guys do (but you do need to invest points in such a unit): 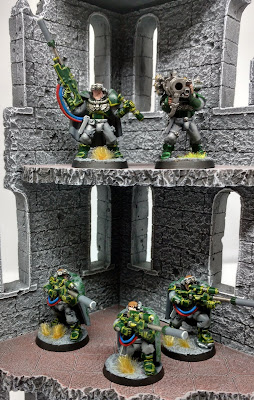 Intercessors are durable to small arms (2 wounds with a 3+ save), have decent mid range anti infantry shooting, and aren't too shabby in a fist fight (with 2 attacks each).  They can take a beating and dish a fairly decent one out in return; seems like they are set up to cap an objective and wait to be pushed off it.

So where do Tactical Marines fit in?  They have a couple of advantages over Scouts and Intercessors which you need to exploit to make the best use of them:
A 5 man Tactical Squad can take a Las Cannon, and suddenly become a viable back field Anti Tank/objective sitting unit.

A 5 man Tactical Squad can also take double Special Weapons in the form of (for example) a Plasma Gun, and a Combi-Plasma on the Sergeant. Now this Troop choice has teeth! Two such units mounted in a Rhino, supported by a 3rd such unit with buffing Characters in a second Rhino looks like a pretty mobile and dangerous force to take forward Objectives.

To be fair, this isn't a uniquely 8th-edition approach to using Tactical Marines; in the last edition my Tactical Squads included these bad boys: 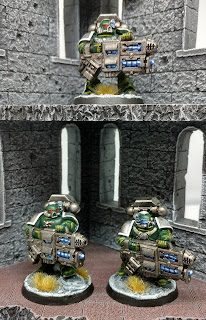 Grav Cannons turned Tactical Marines into killing machines. Whilst the options aren't nearly so powerful this edition, both plasma and melta are viable choices.

Let's head down a couple of rabbit holes before we finish up. I mentioned the Space Marine Heroes blind pack range that GW have just released and some of my friends are really getting into it. Personally I'm not a fan; 5 quid for a lucky dip Space Marine is a bit rich for my wallet, and whilst I like a couple of the sculpts (the guy chucking the grenade is quite cool) I'd rather buy a Tactical Squad box and build a unit with the options I want.

However I hope the range is successful; these are new models for the Collectors out there, and it shows there is still a market and desire for traditional Space Marines as opposed to just more Primaris Marines. Here's one of the new models painted up as a Hammer of Dorn by the very talented Zach: 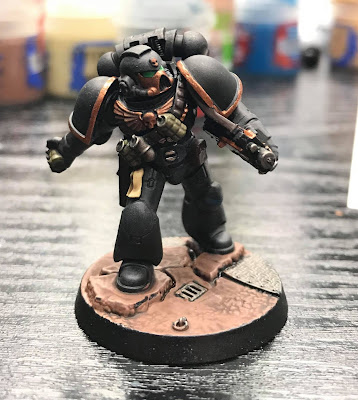 Whilst I was digging out my older Tactical Marines I came across the first ever Tanks I painted; 2 Vindicators. Whilst my painting has improved an awful lot since these were completed I'm still quite proud of the conversions; these are old school metal Vindicator parts on the newer Rhino chassis, with plasticard reinforced armour (this project predated the new plastic Vindicator kit by a few years!)

I hope you've enjoyed this little trip back into my 40K history and it might make you re-evaluate some of the unit choices in your army. If nothing else, get some of your venerable models out of storage and give them a spin on the table top for old times sake. Let me know in the comments how you get on!
Posted by Bryan P. at 20:24