Welcome back to the Vault my fellow Archons. This weekend has seen the UCM put to one side as the gang got together for our inaugural game of 8th edition. The Cult of the Sand Viper (my Dark Eldar forces) faced off in battle against Duncan's Space Wolves, and Paul's lovely new Sisters of Battle force.

We were a man down on our usual gang of four, so decided to try out a 3 way game so we could learn the rules as a group, and luckily the new 40K rule book has a really rather good set of multi player rules and mission.


We build our lists to a 50 Power Level /1000 points limit, and decided to implement matched play restrictions on the use of Command Points and casting psychic powers.

Most of my models had seen regular table top time recently from Mayhem, but I decided to run an Archon, a unit of Wyches in a Raider, and a cheapy pack of Khymera hounds.

Duncan brought a well rounded mix of Grey Hunters and Blood Claws led by a Rune Priest, backed up by Swiftclaw Bikers, Long Fangs and a Vindicator.

But it was Paul who treated us all to the grand unveiling of his plastic Sisters of Battle Project!  No, calm down, not official plastics, but some really cool conversions based on DreamForge Eisenkern Infantry, 3rd party female heads, and a mix of 3rd party resin bits and GW accessories (weapons, jump packs) (Shopping list at the bottom of the article). They look amazing!!!

I won't go into a blow by blow (as per usual I didn't take notes, and I can't remember), so I'll show off some more pictures with a bit of commentary and some thoughts on the new rules at the end. The main focus of the mission is a "King of the Hill" scenario to have the most models around the big Space Marine statue at the end of each Battle Round.

So realisation number 1. Stuff is really fast. The sisters went first on T1, with the Seraphim making a move on the doggies, and the Dominions Scout moves (including the immolator) allowing them to get the many many melta guns in among the Space Wolf tanks.

The movement is aided by the limited difficult terrain rules, those jump pack troops can move from building to building with impunity 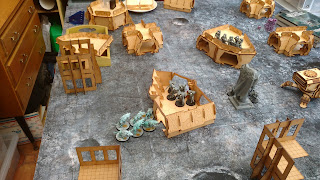 One of the biggest changes in 8th Ed is vehicles now use wounds and armour saves like regular models, and they degrade as their wounds drop. We didn't get to see the reduced profile in action as the tank went from full to zero wounds very quickly!

There isn't a vehicle damage table but when a vehicle hits zero wounds it explodes on a 6. Which the Vindy promptly did. All the models lying on their sides died to the "Mortal Wounds" caused by the said explosion. Ouch!

The very brutal alpha strike was a bit of a shock, and thus the battle cry of the game became "Get Paul"! Strike back began.


As we discovered in the shooting phase cover now works differently, giving a +1 bonus on saving throws to eligible models rather than being a separate category on saving throw. This makes power armoured models in cover really hard to take down with small arms fire (getting a 2+ save!)

And the cover rules for vehicles are a bit well, rubbish to be honest. A vehicle in the footprint of a piece of terrain and 50% obscured gets the cover bonus. A vehicle behind said terrain with the same level of obscurement (or more, but still visible) gets no cover bonus. Sure we'll get used to it.

Venoms and Raiders seem pretty good so far; the defensive upgrades being pretty natty (-1 to hit Venoms, 5+ invulnerable saves for both).

Undeterred by his losses Paul continues to put pressure on the centre.

So this shot reminds me. Morale and Command Points. No really.

Remember the Khymera from turn 1? The Seraphim shot them up and they would likely have failed their morale test (a consequence of being so cheap) and being removed from the board. Morale is another rule I'm on the fence about... Roll a D6 and add the number of casualties taken, then subtract the units leadership. The difference is the number of extra models removed as casualties (ouch).

Khymera leadership is awful. However each player also gets a number of Command Points for each game which can be spent for different effects such as re-rolls  or auto pass morale. So the hounds avoided certain death and bounded onto the objective to be a pain in the arse for another go!

The next couple of pictures are of assaults.


Another takeaway here. The changes to the assault rules are one of the biggest adjustments to make compared to the last edition, particularly with regard to the movement of models. This will be one of the most challenging aspects of 8th ed play to get right and will reward players who can do it well.

It's also a touch controversial. I really like the ability to control fights, negate overwatch and generally muck up gun lines; it's a very welcome change to the shooting gallery that was 7th. Others weren't so sure, with a feeling like there are too many sub phases and the 1" buffer/end closer to the closest enemy rule seeming contrived to allow/disallow the fake multicharge and fallback move.

The Wyches did OK in the assault they participated in; their opponents were already engaged so didn't need to soak overwatch, and being able to choose their combat drugs was a boon as well. Still, they are super fragile and will need some more game time to see if they are an auto-include or not.

I do think most 8th ed lists will need to run an element of assault units now.

Characters are weird in 8th Ed. Characters can't join units (to avoid the Death Stars of old apparently), but grant buffs via auras (so encouraging death star like model placements). And characters have odd targetting rules where you can only shoot them if they are the closest enemy unit.

Not closest in that direction, but closest. Imagine a Venom at the centre of a clock face, with an enemy character at 12 o'clock 6 inches away, and another enemy unit at 6 o'clock 5 inches away. Can't target the character. Just seems wierd to me.

So I'm all out of pics now. For all my picking at the rules we had a really good time; it's still 40k as we now and love it, and with a few games under our belt we'll be speeding along as the core rules are a lot simpler to follow.

For those who care about such things the Dark Eldar won the actual game, having capped the objective for two or three turns.

And we are already planning an updated set of 8th ed Campaign and Kill Team rules.

But more important is the promised Plastic Sisters shopping list:

I'll add the Head and Tank Bits when Paul sends me the links.

Thanks for taking the time to read. Thoughts/comments always appreciated.