Welcome back to the Vault faithful readers; this time I advise wearing shades as the paint scheme I'll be showing off is a tad bright!

Whilst I am *very* excited for the upcoming 40K 8th edition, I've actually got another project on the go. I've signed up for the First Founding's upcoming "Critical Engagement" Dropzone Commander tournament, and that means I'll need some painted models! So one new army, one month, no problem!!!

Told you they were bright!

I started playing Dropzone Commander approximately 18 months ago; it is very popular at the club (which is home to the Orbital Bombardment Blog and Podcast crew), and when they ran an escalation league at the club last year I decided to jump in.

Faction wise I chose the United Colonies of Man (or UCM) purely on the basis of the aesthetics of the models, and having just seen Ant Man I decided to go with a Yellowjacket inspired colour scheme.  However, given these models are also reminiscent of certain cartoon characters from another movie franchise I quickly came up with the United Colours of Minion nickname. I kind of like it.

I've played a few games and slapped some paint on a few of the models, but the system has never quite clicked with me and I've fallen back into my 40K habits. I'm hoping Critical Engagement will be the spark to reignite my DZC interest.

And I'm finding painting such small models a real challenge as well. The grungy weathering looks OK on the tanks, I'm happy with how the infantry are turning out, but I'm feeling really meh about the drop ships. I've got plenty of models to paint so I'll experiment and see what works.

Critical Engagement will have plenty of really skilled players there and I'm under no illusions as a rookie as to how well I will do; so I'm taking a list with models that should be fun to play. I'll share it here as it will give a good indication of my to do list as well. 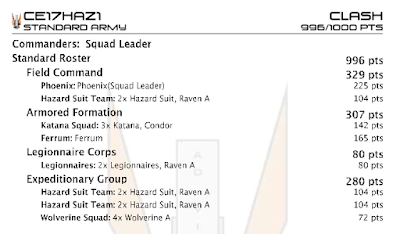 Things might change as I get some practice games in, but the current state of play stands like this:
And of course I need to provide some pictures!


Once again thanks for reading. We'll have to take a book on the next article; will my discipline hold for painting motorized bananas or will the lure of 8th ed be too much!