Welcome back to the Vault! Regular readers will know that the most common posts here tend to be pics and words of the latest gaming model I'm painting, be it a Plague Marine, monster for D&D, terrain or whatever. For today's post I thought it would be fun to revisit one of my first ever Warhammer 40,000 projects; the Vindicator tanks which formed the backbone of my Lightbringer Space Marines army lists waaaaay back in 4th edition.

It's easy to find the flaws in these models:

And if I'd been working on these models with my current hobby skills/knowledge I'd probably be disappointed with them. But I'm not (disappointed that is). 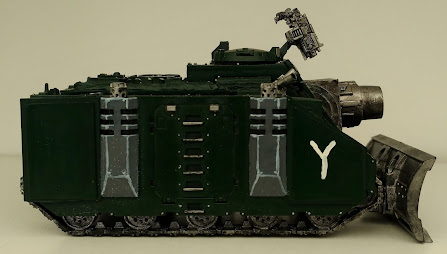 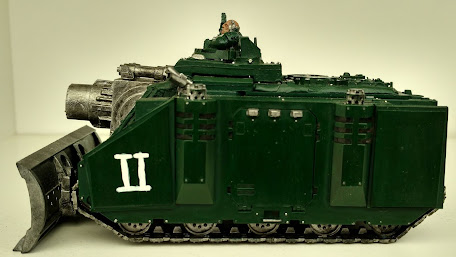 There's a lot going on in these models as I built them prior to the release of the current all plastic Vindicators. The Cannon, top part with the venting fans, etc. are all metal components designed to fit with the old school Rhino chassis. I bought the bitz from ebay (without realising a couple of pieces were missing in the picture - lesson no.1), and fitted them with plasticard and green stuff to the new Rhino chassis. That was a learning experience in itself and I'm more comfortable with those simple green stuff tasks now.
The dozer blades are from Imperial Guard Chimera, and certainly don't look out of place on the tanks. Another lesson learnt in terms of nicking bits from one kit to fit to another.
The extra armour was cut from plasticard and intended to represent the bulkier, more armoured form of the battle tank. I did use templates if I recall correctly, but I'm really not that great with straight lines it seems! 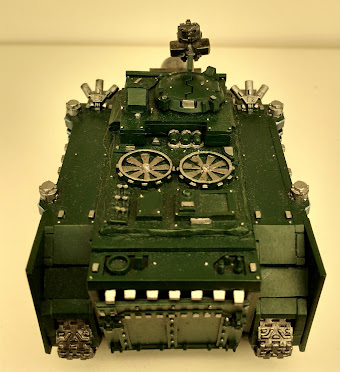 The paint job was very simple as I think I was struggling to get an entire army painted to table top standard. It was certainly good enough for local club events, and these tanks performed sterling service in the Emperor's name.
Apart from the time one Vindicator immobilised itself trying to traverse a forest and spent the game just blankly staring at some trees. I think that was the first turn of my first ever tournament match. Doh!
So would I ever go back and rebuild/repaint these models? In all honesty no. I was proud of them at the time, and I'm still quite proud of them now. They were a challenge to my novice hobby skills, and they are a great reminder of how I've progressed since then. It would be fun to dig the Lightbringers back out for a game and let them see the tabletop again! May be when we get some Garden-Hammer going later this summer?
Posted by Bryan P. at 14:03