Welcome back to the Vectorium! The crappy weather over the weekend gave me the opportunity to indulge in a leisurely hobby session. Sensible Varchilde should have put paint onto some of the Death Guard models, but the hobby butterfly alighted on my shoulder and I decided to build some more models to add to the painting back log instead!

Thus the addition of two Foetid Bloat Drones to reinforce the original Drone from the Dark Imperium box set. The first of the Daemon Engines is armed with the ridiculously named Flesh Mower. 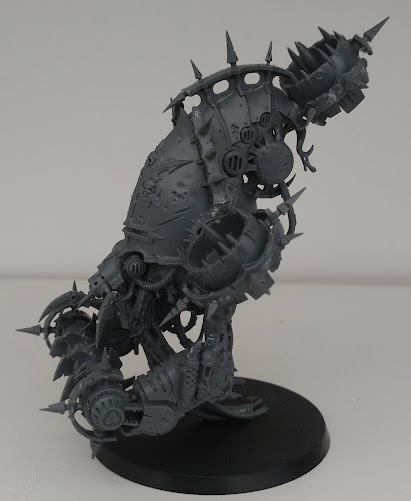 Yes, it's a Daemonically-possessed flying lawn mower. That's 40K pretty much summed up in a single sentence 😜. The Flesh Mower is pretty good rules wise; the Drone makes 12 attacks with it at WS3+, and it's a S7, AP-2 Damage 2 Plague Weapon. Combine that with the Drone's Contagions ability (-1 Toughness aura), and it's wounding Space Marines on 2's re-rolling 1s!

The Drones are also surprisingly mobile for Death Guard units, having a 10" Move stat so Mick the Mower should have a decent chance of getting in close.

I glued the Flesh Mower in place on the first model, and with hindsight that was a mistake. Some experimentation with the second model showed that there was enough tension on the Flesh Mower and Heavy Blight Launcher to sit comfortably without the need to glue: 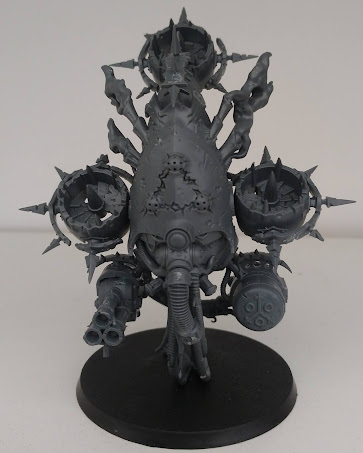 You can see the "arms" used to connect the weapon systems to the Drone in the pictures below: 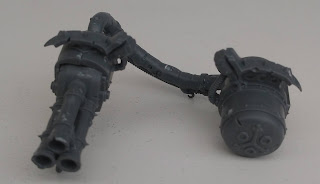 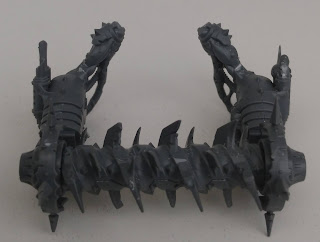 The Heavy Blight Launcher is bit of a funny weapon; Assault 6, S6 AP-3 Damage 2 Plague Weapon with a 36" range. Again it's quite good at mowing down Space Marines, but there are plenty of other weapons in the Death Guard arsenal which can do that. It will need some play testing to see how effective it is. I guess it would allow a Bloat Drone to zip off to a far objective and still contribute some meaningful shooting.

The final weapon option available to the Drones are Plague Spitters; basically flame throwers which glop all sorts of corrosive crap at their opponents. 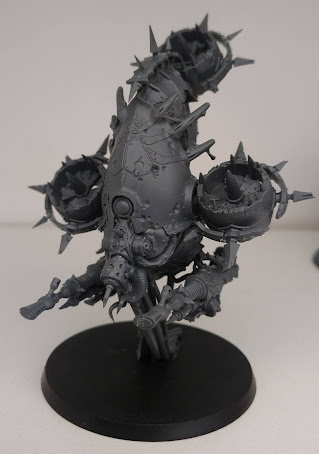 This is another short range (12") option, but given it's an assault weapon which automatically hits, the Drone can advance without fear of it's shooting being degraded. This is the only option which came with the Dark Imperium model, but I still think it's quite a good option.
So the next question to ask; are there any useful Stratagems to run with Bloat Drones?

I'm looking forward to running the Drones on the table top; they are an unusual unit for the Death Guard, and they remind me somewhat of the Dark Eldar Talos pain engines. It will be interesting to see how well they fare.

I mentioned in a previous post I'd put some base colours on the Noxious Blight Bringer: 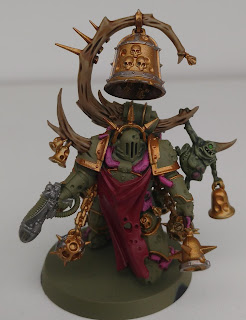 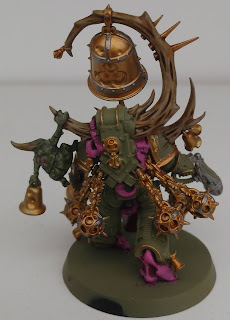 The model is starting to grow on me; he's got a lot of bling going on, and I reckon his back must ache carrying the bell like that. In the tradition of naming the Death Guard models he'll have to be called Big Ben just for the bell!

As always, thanks for stopping by and reading. Fingers crossed the club will open at the end of June so I better start thinking of an army list with some of these Nurgley models so I can play a game with them!