Welcome back to the Vault once more!  Today's post is the second part of my primer to the Grey Knights Psychic Phase. You can find the part one here, where we discussed the probabilities involved in casting the various psychic powers; now we'll talk about the powers themselves.

Please note, like a lot of information on the internet this post contains opinion; your opinions of the powers may be different and you are encouraged to garner your own experience from the table top. Nothing beats playing the game! 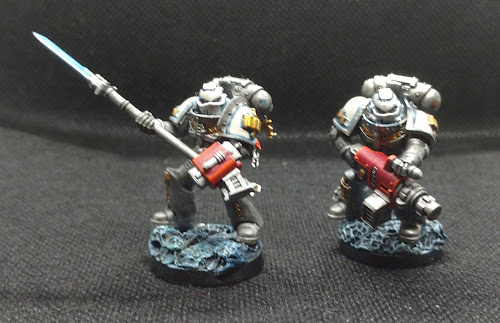 Grey Knights are quite unlike most other armies in that most of their units are Psykers, and this means a Grey Knight Commander will have access to most of their powers, as opposed to say a Space Marine player with a single Librarian who will only know a couple of the spells. An important rule is that each spell (bar Smite) can only be cast once per Psychic phase, so if you've allocated the same power to multiple units deciding who casts it is key.

A lot of the powers can be cast on other units; you might choose to use a particular unit as a Buff caster for other units but that relies on keeping those units reasonably close together. If you plan for units to work in isolation then remember to choose those key powers for those units.

Grey Knights have access to two Pyschic Disciplines, and first up is the Sanctic Discipline from the Codex. Powers from this list can be taken by any Grey Knight Psyker unit.

Purge Soul (WC 5): This is a dealing power; having been successfully cast the GK player and his opponent each roll a dice and add respective Leaderships (casting unit and target unit respectively). If the GK wins, he deals 1 mortal wound for each point he wins by.  I think this power is a bit of a trap; yes you can get some reasonable numbers if you roll well, but given Grey Knight middling Leadership, and the swingy nature of a roll off with your opponent you may end up achieving nothing. I'd consider this power as a filler for a Character if I'd run out of other choices.

Gate of Infinity (WC 6): Oh Gate of Infinity how I love you! This power is cast on a Grey Knight unit (not necessarily the unit casts the spell), and that unit immediately makes a Deep Strike move (i.e. appear anywhere on the board more than 9" from an opposing unit).  This allows an out of position Grey Knight unit to move to somewhere more important, take an objective and so on. It gets even better when combined with Edict Imperator (which we'll discuss later on). I reckon this is a must take for multiple units, particularly Ob Sec Troop choices who will want to hop between objectives.  I also want to cast it on a transport full of models!

Hammerhand (WC  6): Grants a Grey Knight unit +1 to wound with melee weapons until the next GK Psychic Phase. This means it will work for both yours and your opponent's Fight Phases. A good choice for a bully unit like a Terminator or Paladin Bomb before either charging in, or receiving a charge from your opponent. I used to think of this power as the default choice for a unit if I didn't have anything else in mind (because getting better at fighting is good right?) but I've been swayed by Gate of Infinity in the much more movement focused 9th edition missions.

Sanctuary (WC 6): This power grants a Grey Knights unit a 5+ Invulnerable save or improves such a save by  +1 if the unit already has one. Typically cast on Nemesis Dreadknights, but there are a few other cheeky targets for it:

Astral Aim (WC 5): Another great power; this allows a Grey Knight unit to target enemy units that aren't visible and remove saving throw bonuses for cover when using Shooting attacks. The archetype is to use this on a hidden Dreadnought armed with anti tank weapons, but there are other tricksy uses; cast it on a unit Purgators armed with Psycannons, then Gate them somewhere hidden and blow up something your opponent cares about!
Vortex of Doom (WC 8): This is the second damage dealing power on the list, and more interesting than Purge Soul. If this short range spell casts, then the target model's unit suffers D3 mortal wounds (like Smite), but then so do every other enemy unit within 3" of that model also suffers D3 mortal wounds. If the spell is overcast on a 12+ then the number of mortal wounds increased to D6. Whilst the Warp Charge value is eye wateringly high don't forget that Grey Knights get access to a number of means of increasing their chance of casting (as discussed in part one of the primer).

I think a lot of the value of this power comes from mind games; if your opponent positions poorly you can potentially deal out a lot of punishment so he'll have to modify his plans accordingly. 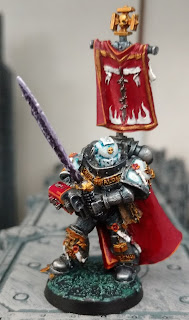 The second Grey Knight discipline is the Dominus Discipline (the rules for which are in the Ritual of the Damned supplement). This discipline is only available to Grey Knight characters, and they must choose all of their powers from one list or the other (so no cherry picking unfortunately).

Warp Shaping (WC 5): This power allows to change the dominant Tide of the Warp (and indeed the only means to do so). The Tides provide a variety of buffs to Grey Knights (varying from defensive through offense via psychic, shooting and fighting attacks). The ability to shape the Tide as the battle progresses is important as the following simple example demonstrates:

Armoured Resilience (WC 6): Opponents rolling against the target Grey Knight infantry unit suffer a -1 to wound penalty. A great buff spell typically cast on a bully unit (although I'm not a fan of such units myself), this provides extra durability to a key unit (for example holding a critical objective).
Ethereal Manipulation (WC 7): Provides a Grey Knight unit with full re-rolls to hit in the Shooting phase if at half range or less. This is one of the few means for Grey Knights to access full to hit re-rolls (the standard Grand Master aura is re-roll 1s); but it's some what hamstrung by the range limitation of standard Grey Knight weaponry. Not bad to support aggressive plays, or if cast on say a Dreadnought's longer range Lascannons.
Edict Imperator (WC 7): The target Grey Knight unit can shoots as if it was the shooting phase and then moves as if it was the movement phase (no advance). This is another fantastic power, in part for the bonus movement (now that Land Raider is moving 20" this turn), but also to take an out of step shooting attack; this could allow the removal of a screen prior to the shooting unit scooting up, or clear a drop zone for a unit to arrive via Gate of Infinity.  You could also benefit from Psybolt Ammo or Psychic Onslaught strategies twice in a turn (as two different units can shoot in two different phases); that'll eat your Command Points up though...
Empyrean Domination (WC 7): Gain 1 Command Point. That's lucky given the previous trick we've just discussed; Grey Knights are a very CP hungry army and every CP gained is valued.
Inner Fire (WC 5): Another gimmicky damage causing spell like Purge Soul or Vortex of Doom, although this is rather more reliable, especially when paired with Powerful Adept. If successfully cast the Grey Knight player rolls a number of dice equal to his cast value; for every 3+ he inflicts a mortal wound to his target, and for each 1 the casting psyker suffers a mortal wound. Capable of great rewards like the other two damage dealing powers this is preferable since there's less the opponent can do to influence the outcome.
I hope you've enjoyed this quick tour through the Grey Knight powers and perhaps it will cause you to re-evaluate some of them. It's important to factor in who will be casting what on whom when selecting the spells for your army list, and that each Psyker must finish casting before moving onto the next; this may influence your selections as well.
I have a game arranged for next week, so I'll see if I can put some of this theory into practice on the tabletop.
Posted by Bryan P. at 17:13