The Dead Shall Rise: Work In Progess

Welcome back to the Vault! The hobby butterfly seems to have settled in the fantasy realms as I've started on another "terrain" project.  This is a little different as it's an entry for the Frostgrave Facebook group's monthly hobby competition under the theme of "Wraith".  The brief is deliberately vague to allow the creative juices to flow!

I purchased the first issue of the Age of Sigmar "Mortal Realms" magazine when it appeared as two quid for a dozen or so miniatures was just too much of a bargain to pass up. And luckily a bunch of those were wraiths.

A number of other people on the group have made the same purchase so I've decided to do something a little bit different and incorporate some of the spectres into a diorama/terrain piece.  A quick dive into the bitz box and the hobby supplies found some useful pieces allowing me to knock this up:

I've decided to paint the terrain elements first.  The floor is an off cut of plasticard and I've arranged some cardboard tiles on top.  Like all the pieces this was primed black before painting. 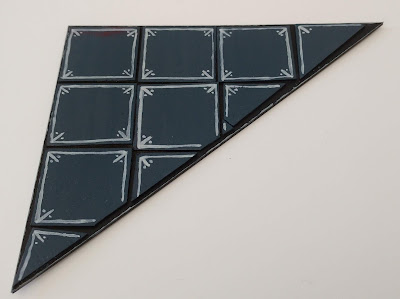 I quite like the wobbliness and breaks in the design; it sort of help supports the ruined crypt theme.

The sarcophogus and column are both from an old Lord of the Rings starter kit. The Wraiths have had a few minor conversions (removing excess chains and so on) before having their lower halves removed to give the impression they are emerging from the stone. 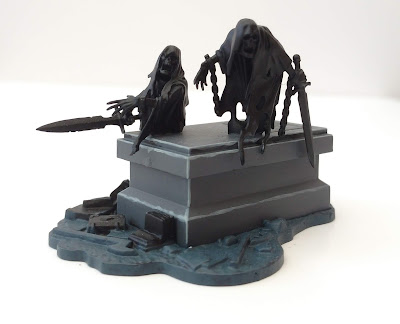 I quite like the conversion on the last Wraith; his crappy weapon has been replaced with a grasping hand as if he's coming forward to grapple his unwary victim. 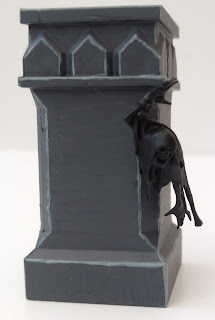 Here's a final shot of all the elements together; it's looking very dark at the moment, but painting the Wraiths and all the elements at the base of the sarcophogus will make a big difference and let the whole thing pop!

There's plenty more to do, so I'll post a further update once I've applied more paint.
Posted by Bryan P. at 20:34