Welcome back to the Vault once more my fellow Fraters.  I attended First Founding last Friday for an evening of Kill Team shenanigans with Agent Zero.  I haven't played Kill Team in *ages* and decided to play my Primaris Carcharodons Astra list who have all been painted since their last excursion on the table top. 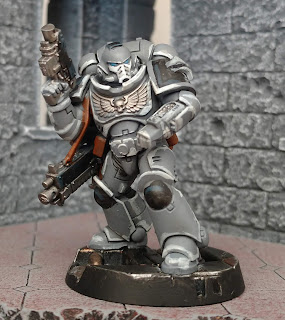 My opponent played a pure Tempestus Scions list, very similar to the Gaunt's Goats list which I'd played in a Kill Team Tournament last year.  The combination of knowledge of both forces and some lucky dice rolls on my part led to a convincing Space Shark victory.

Over the course of the evening we got chatting to another of the club regulars who is working on a very cool and unique Red Corsairs based Chaos army.  The conversation turned to various aspects of fluff and 40K lore, and one of my favourite topics; the Badab War.

This sparked a fantastic idea; a Badab War inspired Kill Team campaign. The Badab War is essentially a Space Marine civil war (including but not limited to the Carcharadons on side, and the Astral Claws (as the Red Corsairs were known before they turned traitor)), albeit more modern than the Horus Heresy.  Using Kill Team would let players get involved without committing to a huge hobby project and we can evolve some custom lists and missions for key events and forces like the Tyrant's Legion.  More on this madcap scheme in the future.

I really like the Infiltrator models; suitably Spec Ops.

And I have to confess, that like many Power Armour Junkies I am completely smitten with the Eliminator Snipers.

If I'm feeling brave these guys might get the black and yellow Tranquility camo scheme.

I'm a bit more on the fence about the look of the HQ choices: 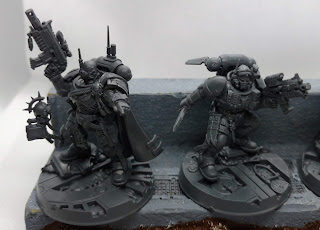 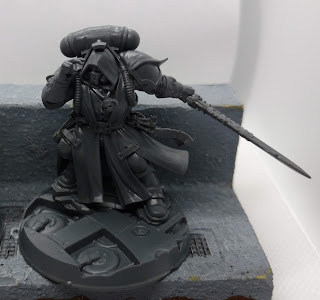 The Shadow Spear set also included the Suppressors. Rules wise these guys are great, but the models look just a bit preposterous with their combination of over-compensation cannons and pogo boots! 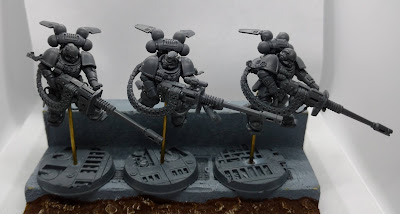 One facet of the Primaris kits I don't like are the new flight stands which need to be glued to the backs of the models.  I've seen some third party alternatives which look better but still suffer from the problem of making large awkward to transport models. I've chosen to go down the old school brass rod route. 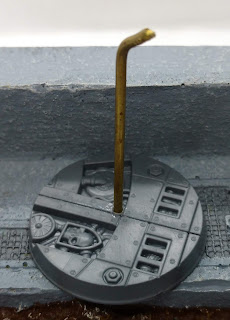 The 40mm Mechanicum bases have a convenient central cylinder to align the rod, and can be capped off for a decent fit. Easy peasy! 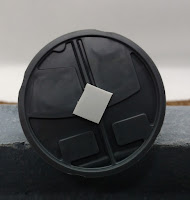 I've got a 40K game scheduled for next Friday; a number of these models are bound to make their way into the list and I'll report back on how the match goes!  As always thanks for taking the time to read the post and stay tuned for more progress on the Space Sharks.
Posted by Bryan P. at 21:07