Welcome to the Vault! Today's post is a new subject for the blog; 5th edition Dungeons and Dragons. I've been involved in a campaign for a year or so now and really enjoying the play experience.

One of the aspects of 5th ed I like is how overt extra-planar influences have been baked into the core game; Celestials and Tieflings (extra-planar lineage species) are available for players, and Celestials and Warlocks have a variety of multidimensional bloodlines and patrons to choose from. 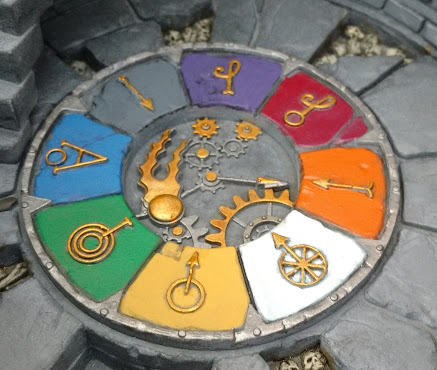 I've had an idea brewing for a while to extend the facet of the game. I like the idea that the relationship (proximity) between the planes are in constant flux, and at various times a plane could be brought "closer" to the Prime Material, and so could assert an influence on the Material realm (much as how the position and movement of the moon affect ocean tides).

The Players Handbook cites 24 Planes in addition to the Prime Material: 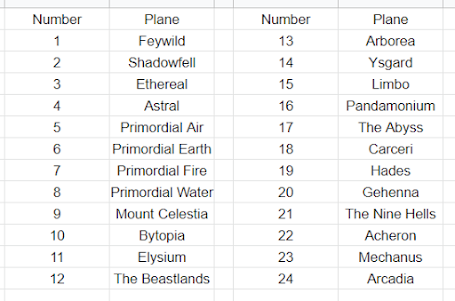 The DM can then make a second roll (let's choose a D6 again for simplicity); this determines for how many days the previously determined plane remains Dominant.

Each Player Character should have a Planar Affinity; this can be chosen to match a back story, or determined at random at the DM/Players preference. Perhaps there is a minor touch of Celestial bloodline somewhere in the family tree, or a past relative has had dealings with a being from the chosen realm?

Now this concept can be extended even further. The Warhammer Old World has a similar idea in the form of the Magical Winds (which equate to each school). So let's have a similar table for the D&D magical schools: 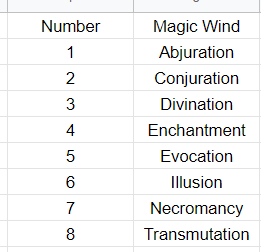 And each Player Character can have a Magical Affinity, chosen to match backstory or at random if desired.
The Magical Winds will ebb and flow, and at any time one will be Dominant. This again could be chosen at random, with a random duration, or perhaps we could choose to have the Winds behave more orderly and they follow in turn, each being Dominant for D4 days before the next ascends.
Again, when the Dominant Magic Wind and a Magical Affinity match, then the lucky Character receives Inspiration at the start of the day. A generous DM may allow 2 doses of Inspiration when both Plane and Magic Wind are aligned for a Character.
This pair of mechanics could have some great impact on D&D adventures; soothsayers who predict the upcoming Dominant Planes and Winds, events which are planned to take place on auspicious Dominant Days (or unlucky Dominant Days given your perspective).
Perhaps there are the equivalent of Eclipses when two or more Planes become Dominant and there are cross over points between realms? I think I'm getting quite inspired by this idea, never mind Player Characters.

I quite like the idea of a Divination specialist Wizard who spends all his time not quite focused on the here and now, looking into other realms and fretting about Carceri's orbit when it nears Elysium and how disruptive this could be to the Kingdom particularly if it occurs when the Illusory Wind is Dominant!