Welcome back to the Vault once more my fellow Venturers, and I hope you are all keeping yourselves safe and well during these uncertain times.  Gaming wise I've been playing various board games with the family, and participated in the First Founding Dark Sun D&D campaign session over Discord which was a lot of fun.

I had also planned to play a solo Frostgrave scenario, but my eldest daughter decided she'd like to play so we had an impromptu rumble across the ruins of Felstad; this was a great way to spend a couple of hours!

All the fantasy gaming has put me in the mood to paint some related model, so I decided to pick up my Malign Sorcery project.  I've been painting up some of the wonderful Age of Sigmar Endless Spells models and coming up for some rules for them in Frostgrave.  Next on the list are the Umbral Spell Portals. 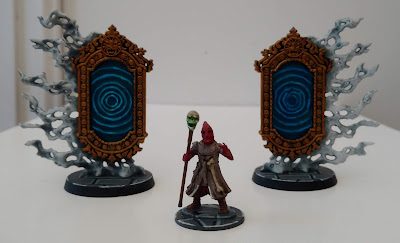 These were fun to paint up, and have a very simple scheme:
The bases are my usual interpretation of "Frostgrave Flagstone".

There's a lot more of the smoke on the back of the Portals: 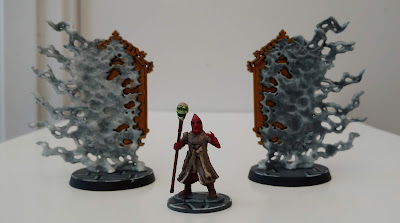 I have to confess that the Spell Portals are reason I bought the Malign Sorcery box set in the first place as these models have so many uses, and these is a wonderful hint of mystery about them.  Who does the face at the top of the portal represent? And surely the collection of skulls dressing the opening warn of grave danger from the other side! 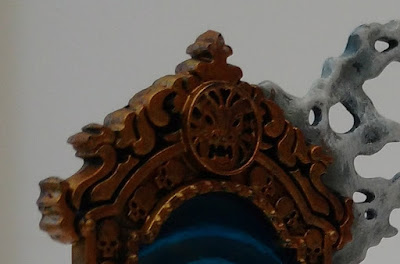 So how do I see these being used on the table top?  There are some obvious choices:
My intention for these blog posts was to provide some suggested rules that Frostgrave players could overlay onto whatever scenario was being played, rather than alternative scenarios, so here are some ideas.

(Option 1) The Hall of Mirrors

Both Warbands have entered upon a strange complex decorated with a large number of enchanted mirrors; the Wizards soon realise they can project an element of control over the looking glasses and influence the real world through them.

(Essentially treat the portal as a mobile Wizard Eye spell, the model should not impede you or your opponent's movement, etc. If in doubt remove the portal for the current game play and replace it when it makes sense to do so).

(Option 2) Mirror, Mirror on the Wall

Within these ruins reside the fabled Soul Trap Mirrors. These artefacts have been used to contain the essence of ancient and knowledgeable beings; the adventuring Wizards are keen to seek out the secrets of these tormented souls.

Below the mighty Acecerak asserts his will on the Soul Trap (and probably grabs the loot, greedy git). 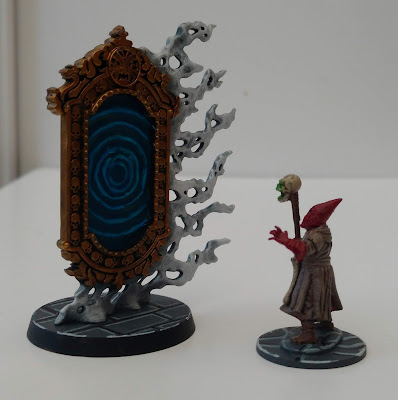 I hope you've enjoyed the post; there's plenty more hobby to be done during lockdown and I'm looking forward to sharing it with you.  Feel free to let me know what you are doing hobby wise at the moment in the comments below.
Posted by Bryan P. at 21:01