Welcome back to the Officers Mess!  I've been preparing for the upcoming Glazer's Creek game by painting some more Cadian models; my labours resulting in a shiny new Infantry Squad.

The Glazer's Creek scenario uses Power Level for the army selections, so it's a great opportunity to make use of some of the more thematic upgrades for units and models. First up is the Missile Launcher Team: 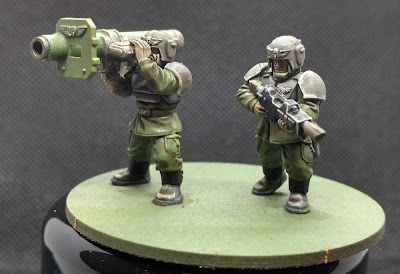 The squad is ably led by a Sergeant.  The Laspistol and Chainsword combo is straight out of the box; I need to source some appropriately sized bolters to give my Sarges a decent ranged weapon! 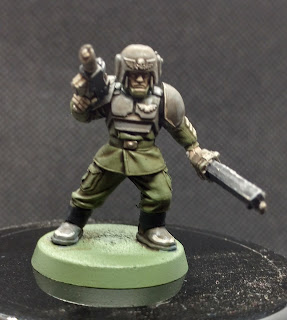 Next up are the squad Grenadier and Vox operator: 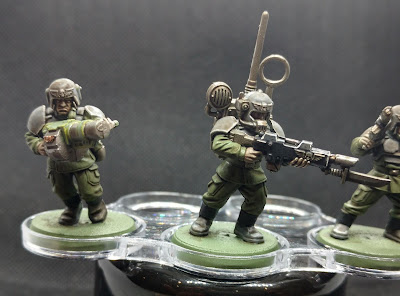 The Grenade Launcher is a great complement to the Missile Launcher with its choice of Frag and Krak modes.

And of course no Infantry Squad is complete without the Bullet Catchers Lasgunners. 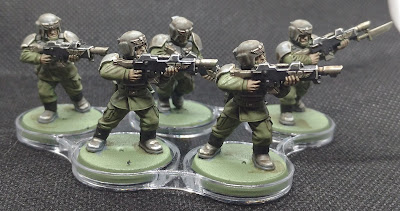 Putting this squad alongside the Mortar Teams and various other painted models I see a basing session in my future very soon.

I had the pleasure of visiting Warhammer World last weekend with a number of the First Founding Club members; in between playing a sprawling 5 player team game, eating Dirty Fries in Bugmans and ogling the lovely models and dioramas in the exhibition I picked up some direct only models from the store:


The Easy Build Troopers will no doubt see use at Glazer's Creek, whilst the Hell Hound will be seeing table time at Octoberfest.  I will keep you all informed as the Cadian reinforcements continue to muster.
Posted by Bryan P. at 20:46